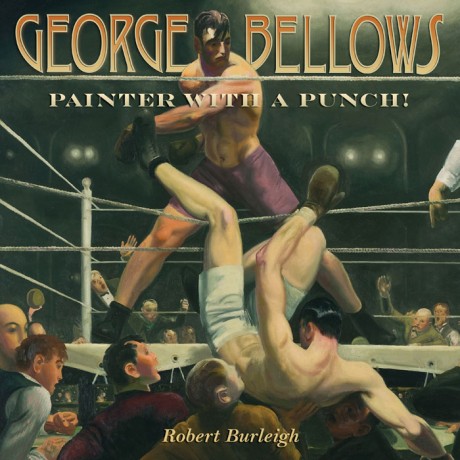 Painter with a Punch!

No punches are pulled in this fascinating biography that covers the life and work of the prolific artist George Bellows. Having spent most of his adult life in New York City, Bellows left behind an extraordinary body of work that captures life in this dynamic city: bustling street scenes, ringside views of boxing matches, and boys diving and swimming in the East River. Art reproductions and photographs from his youth round out the book.

"The book's excellent reproductions of Bellows' work will excite young readers and budding artists. A fine portrait of an artist not on everyone's radar but whose work can be readily understood and appreciated by youngsters."

"Veteran biographer Burleigh breathes a great deal of vitality into Bellows' short but significant life and career. Accompanied by Bellows' striking and powerful works, this is an artist bio that, like its subject, packs a punch."
—Booklist

"Burleigh tells Bellows's story with immediacy and with a firm grasp of his audience, striking the right balance of broad stroke and detail. Burleigh's admiration of his subject comes through loud and strong and infectiously. And there are handsome reproductions of Bellows's work...This impressive book captures the connection between the man and the world he observed during his short life. A new generation of young urban observers will be grateful."
—New York Times

"This is a beautifully illustrated biography of painter George Bellows. Bellows found his inspiration in the working class, including the gritty night life of the city... Burleigh adds to the interest of the story through direct quotes that are well-documented."
—Library Media Connection

"Burleigh is an enthusiastic and adept tour guide through Bellows's New York milieu. Crisp reproductions coordinate closely with the text, so readers will easily connect..."
—The Bulletin of the Center for Children's Books

Robert Burleigh is a painter and the author of a number of award-winning, critically acclaimed books for children. His books include Paul Cézanne: A Painter’s Journey, Toulouse-Lautrec: The Moulin Rouge and the City of Light, and Seurat and La Grande Jatte. He lives in Grand Haven, Michigan.