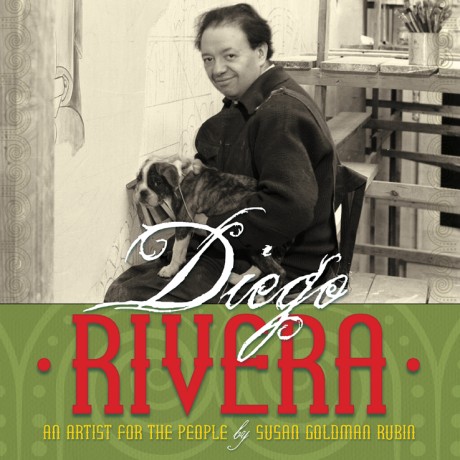 An Artist for the People

Diego Rivera offers young readers unique insight into the life and artwork of the famous Mexican painter and muralist. The book follows Rivera’s career, looking at his influences and tracing the evolution of his style. His work often called attention to the culture and struggles of the Mexican working class. Believing that art should be for the people, he created public murals in both the United States and Mexico, examples of which are included. The book contains a list of museums where you can see Rivera’s art, a historical note, a glossary, and a bibliography.

Praise for Diego Rivera: An Artist for the People
STARRED REVIEWS
"With engaging prose that is beautifully illustrated with Diego Rivera’s paintings and murals, this spacious volume introduces the great Mexican artist to young people. Accompanied by crisply reproduced color images of both the bright, minutely detailed murals as well as archival photos of the artist at work, the accessible account discusses how Diego constructed his art..."
--Booklist, starred review

"The stunning illustrations include images of Rivera’s murals, his “cartoon” drawings, reproductions of art that he found influential, and photographs. The design, with scrollwork along the top and bottom and an unusual placement of page numbers, exudes style. The text is clearly written, straightforward, and attention-grabbing, with a good number of quotes interspersed throughout."
--School Library Journal, starred review

"There is life to these pages, and breadth to its subject. Short enough to reward a wary reader but with enough context and clarity to bring Diego to life, Rubin takes a tricky guy for kids to know about and makes him precisely what he was: bigger than life."
--School Library Journal, Fuse 8 Blog

"Enhanced by gorgeously reproduced photos and artwork, Rubin’s account follows the Mexican artist from his early drawings — as a small child, he was given free rein in a room “covered with black canvas as high as he could reach” — through his eventful, productive life."
--The Washington Post

"Rubin traces Rivera’s life from his emergent boyhood talent, through the formal studio education that left him restless and professionally unsatisfied, to realizing his calling to create massive public artworks for the common people, celebrating the dignity of their labor."
--Bulletin of the Center for Children's Books

Susan Goldman Rubin is the author of many biographies for young people including Jean Lafitte: The Pirate Who Saved America and Andy Warhol: Pop Art Painter. She lives in Malibu, California.