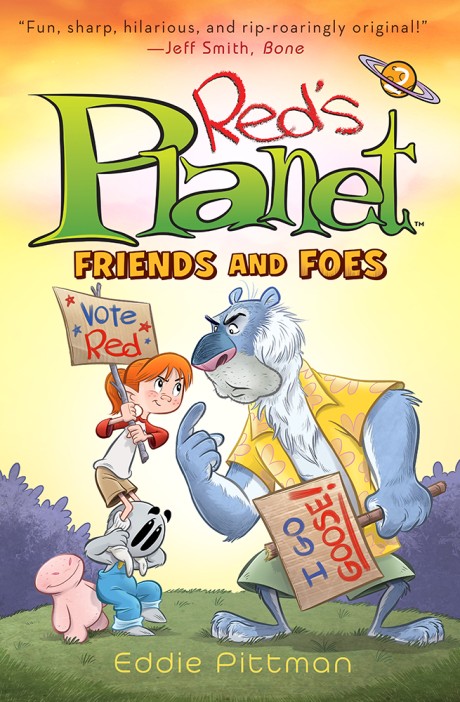 After crash landing on a distant planet, Red finds herself in a strange paradise surrounded by a host of odd and intriguing aliens, including her small gray companion, Tawee, and the planet’s grumpy custodian, Goose. But even paradise has its problems. When survival gets a little tough, Goose and Red find themselves locked in the middle of the craziest election in the galaxy, competing for the acceptance of the castaways and determining who will lead them all. As this unlikely band of misfits comes together to create a new home for themselves, the enigmatic Uskog space pirates return, searching for a mysterious stolen treasure. Now Red and her fellow castaways must decide if their mismatched family is worth fighting for.

"Pittman's illustrations are enormously appealing, with an animated feel and imaginative worldbuilding...young readers will keep reading and may pick up a little civics along the way."
Kirkus —

"Pittman’s comical space adventure offers plenty of slapstick humor with a nice touch of heart . . . The cartoonish artwork retains the same animated style as the first volume, and the imaginative alien designs, particularly when they play baseball, are particularly delightful. The episodic pacing, breezy tone, and engaging visuals should give this broad appeal."
Booklist —

Eddie Pittman is an award-winning cartoonist who works in animation, comics, and illustration. He began his animation career with Walt Disney Feature Animation, working on films such as Mulan, The Emperor’s New Groove, and Lilo & Stitch. Most recently, Pittman was a writer/story artist for Disney’s hit TV series Phineas and Ferb. He lives in Florida. Visit the author online at redsplanet.com.