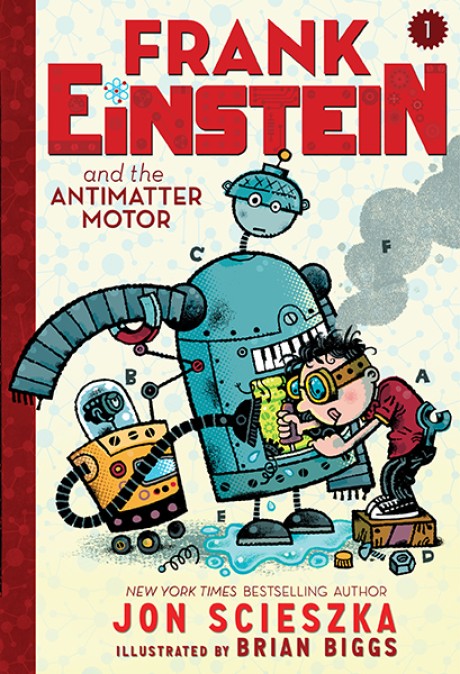 "I never thought science could be funny . . . until I read Frank Einstein. It will have kids laughing."
—Jeff Kinney, Diary of a Wimpy Kid

Kid-genius and inventor Frank Einstein loves figuring out how the world works by creating household contraptions that are part science, part imagination, and definitely unusual. In the series opener, an uneventful experiment in his garage-lab, a lightning storm, and a flash of electricity bring Frank’s inventions—the robots Klink and Klank—to life! Not exactly the ideal lab partners, the wisecracking Klink and the overly expressive Klank nonetheless help Frank attempt to perfect his inventions.. . . until Frank’s archnemesis, T. Edison, steals Klink and Klank for his evil doomsday plan!

STARRED REVIEW
"In the final analysis, this buoyant, tongue-in-cheek celebration of the impulse to ‘keep asking questions and finding your own answers’ fires on all cylinders."
--Booklist, starred review

"In refusing to take itself too seriously, it proves that science can be as fun as it is important and useful."
—Publishers Weekly

"With humor, straightforward writing, tons of illustrations, and a touch of action at the end, this book is accessible and easy to read, making it an appealing choice for reluctant readers. A solid start to the series."
--School Library Journal

"Kids will love Frank Einstein because even though he is a new character he will be instantly recognizable to the readers...Jon Scieszka is one of the best writers around, and I can't wait to see what he does with these fun and exciting characters."
—Eoin Colfer, Artemis Fowl

"Jon Scieszka's new series has the winning ingredients that link his clever brilliance in story telling with his knowledge of real science, while at the same time the content combination of fiction and non fiction appeals to the full range of the market."
—Jack Gantos, Dead End in Norvelt

"Brian Biggs’ cartoon-tastic two-color illustrations add the perfect punch to the “diary” look so many young readers have come to embrace. Scieszka clearly knows his audience and plays right into their hands, as this series promises entertainment but supports it with real science. There are plenty of explosions and experiments to inspire reluctant readers to don the lab coats and start inventing!"
— Sharon Verbeten, BookPage

"Biggs’s cartoonish illustrations, including a number of science-y diagrams featuring subjects ranging from pizza toppings to the inner workings of a flatulent cow, complement the text perfectly. With a second book already in the works, this definitely smells like a hit series."
— Sam Bloom, The Horn Book Magazine

Jon Scieszka has sold more than 11 million books, including The Stinky Cheese Man and Other Fairly Stupid Tales, The True Story of the 3 Little Pigs, the Time Warp Trio series, Guys Read, Spaceheadz, and most recently, Battle Bunny with Mac Barnett. He lives in Brooklyn, New York.