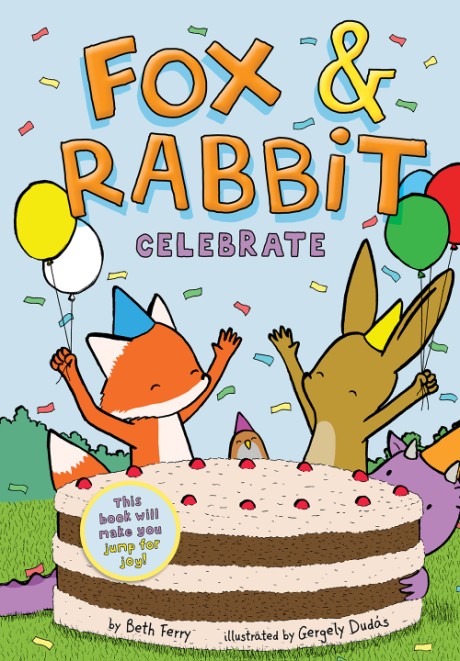 Book #3 in the Fox & Rabbit graphic novel series is full of surprises--now available in paperback!


Fox and Rabbit are cooking up something very special for Sparrow’s birthday! Sparrow loves food, so Fox and Rabbit team up with Owl to create the world’s biggest pizza. But, since they don't have the world's biggest oven, they don’t know how to cook it.

Fox and Rabbit decide to ask for help from Dragon. They’ve never met Dragon (who hopefully likes to eat pizza, not foxes or rabbits…), but they find their courage together. Dragon wants to help but has never eaten pizza. In fact, Dragon has never had a friend or been to a birthday party before, either. It's up to Fox and Rabbit to change all that!

This third outing in the Fox & Rabbit series from Beth Ferry and Gergely Dudás celebrates the ways in which differences can bring friends together.

"Each chapter is full of amusing situations and appealing characters taking care of one another and getting themselves into trouble despite their best intentions. Bright colors and soft, bubbly shapes make every creature, even the dragon, seem cuddly and soothing. The idyllic community offers a pleasant cartoon landscape to visit, where there is always a welcoming friend, something special to do, and something good to eat."
The Horn Book Magazine —

Beth Ferry is the author of many books for young readers, including Caveboy Crush, The Scarecrow, and the New York Times bestselling Stick and Stone. She lives in New Jersey with her family. Gergely Dudás is a self-taught illustrator best known for his seek and find–style web comics. He is the author-illustrator of the Bear’s Book of Hidden Things series. You can find his work on Instagram at @thedudolf. He lives in Budapest.