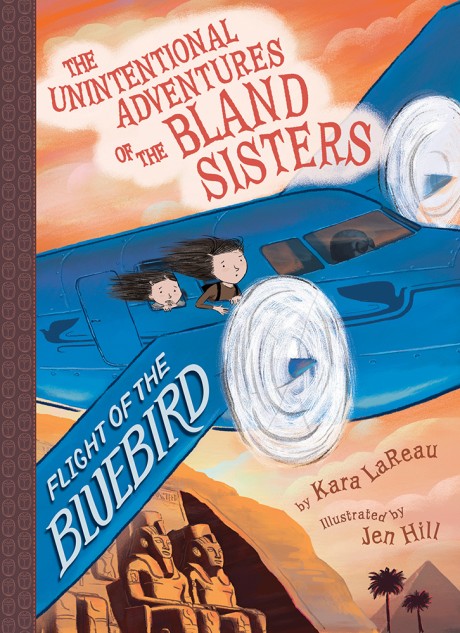 Fasten your seat belts for some unexpected turbulence ahead, as Jaundice and Kale Bland are back for their final unintentional adventure! Now that they’ve returned from the Uncanny Valley to find their home in Dullsville in absolute shambles, the sisters are rescued by high-flying aviatrix Beatrix Airdale. This time, they’re jetting off (literally) to Egypt to uncover the mysteries of a magical scarab. By way of Casablanca and after foiling multiple attacks along the way (thanks to Jaundice’s nautical knot-tying skills and Kale’s super-sleuth powers of observation), the Bland Sisters are reunited with their parents. But it turns out that Mom and Dad aren’t as bland—or as “Bland”—as Jaundice and Kale remember. Thanks to their mother’s old archeology notebook, the Bland Sisters uncover their parents’ real identities and help them achieve victory in one final, family-filled adventure.

Kara LaReau was an editor at Candlewick until she became a full-time writer. She has published many acclaimed picture books for children, including Ugly Fish, Rabbit & Squirrel, Otto: The Boy Who Loved Cars, and the Geisel Award–winning chapter-book series the Infamous Ratsos. She lives in Providence, Rhode Island.