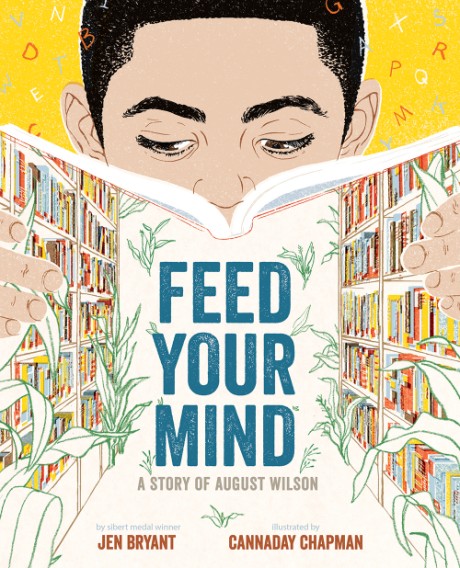 A Story of August Wilson

August Wilson (1945–2005) was a two-time Pulitzer Prize-winning playwright who had a particular talent for capturing the authentic, everyday voice of Black Americans. As a child, he read off soup cans and cereal boxes, and when his mother brought him to the library, his whole world opened up. After facing intense prejudice at school from both students and some teachers, August dropped out. However, he continued reading and educating himself independently. He felt that if he could read about it, then he could teach himself anything and accomplish anything. Like many of his plays, Feed Your Mind is told in two acts, revealing how Wilson grew up to be one of the most influential American playwrights. The book includes an author’s note, a timeline of August Wilson’s life, a list of Wilson’s plays, and a bibliography.

**STARRED REVIEW**
"Chapman’s mixed-media illustrations are sophisticated and engrossing, packed with visual metaphors...  Reading aloud for pure pleasure would be a meaningful tribute to Wilson’s legacy."
Bulletin of the Center for Children's Books —

**STARRED REVIEW**
"Wilson’s passion for words and attention to the world around him emerge in Bryant’s lyrical telling."

**STARRED REVIEW**
"Bryant’s poetic descriptions effectively chronicle Wilson’s artistic journey. . . This empathetic and informative study of August Wilson’s early years explores the complexities of the black experience in America. A book that will resonate not only with bookworms and fans of the playwright but with black children wishing to see themselves reflected in the world around them."
School Library Journal —

"An eloquent love letter to literature and a celebration of its power to inspire, to instruct, and to provide hope, guidance, and direction."
Kirkus Reviews —

Jen Bryant is the author of the Caldecott Honor-winning picture book River of Words and many other picture books for children. Cannaday Chapman is an illustrator whose work has been featured in the New York Times and on the cover of The New Yorker. Feed Your Mind is his first picture book.