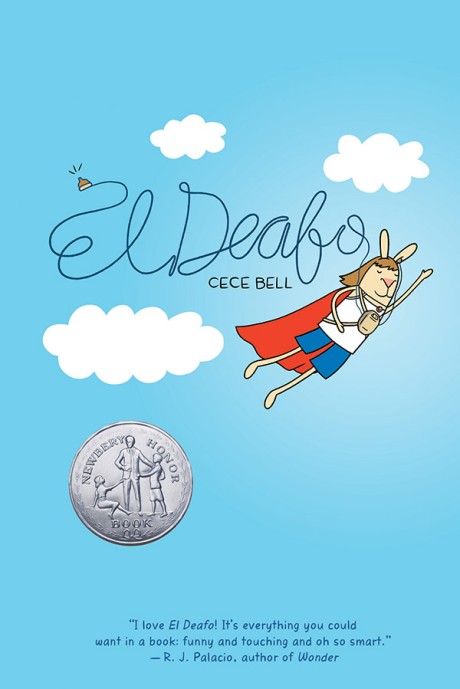 Starting at a new school is scary, especially with a giant hearing aid strapped to your chest! At her old school, everyone in Cece’s class was deaf. Here, she’s different. She’s sure the kids are staring at the Phonic Ear, the powerful aid that will help her hear her teacher. Too bad it also seems certain to repel potential friends.

Then Cece makes a startling discovery. With the Phonic Ear she can hear her teacher not just in the classroom but anywhere her teacher is in the school—in the hallway . . . in the teacher’s lounge . . . in the bathroom! This is power. Maybe even superpower! Cece is on her way to becoming El Deafo, Listener for All. But the funny thing about being a superhero is that it’s just another way of feeling different . . . and lonely. Can Cece channel her powers into finding the thing she wants most, a true friend?

**STARRED REVIEW**
"This memoir is thus exceptionally informative and entertaining in relation to some aspects of deaf communication, but, most centrally and powerfully, it is exceptional for its perceptive, indomitable protagonist and complex story of friendship, growth, and classroom and family dynamics."
— The Horn Book Magazine, starred review

STARRED REVIEW
"A humorous and touching graphic memoir about finding friendship and growing up deaf...  Worthy of a superhero."
— Kirkus Reviews

STARRED REVIEW
"A standout autobiography. Cece’s predilection for bursting into tears at the wrong time belies a gift for resilience that makes her someone readers will enjoy getting to know."
— Publishers Weekly

**STARRED REVIEW**
"This warmly and humorously illustrated full-color graphic novel set in the suburban ‘70s has all the gripping characters and inflated melodrama of late childhood: a crush on a neighborhood boy, the bossy friend, the too-sensitive-to-her-Deafness friend, and the perfect friend, scared away."
— School Library Journal, starred review

**STARRED REVIEW**
"Bell’s earnest rabbit/human characters, her ability to capture her own sonic universe (“eh sounz lah yur unnah wawah!”), and her invention of an alter ego—the cape-wearing El Deafo, who gets her through stressful encounters . . . all combine to make this a standout autobiography."
— Publishers Weekly, starred review

"Bell’s book should be an inspiration for  those who are ‘different,’ and it should help others to understand just what being different means. Required reading isn’t always fun reading. El Deafo should be the first and is definitely the second."
— New York Times Book Review

"This funny and poignant memoir in graphic novel format about a child grappling with hearing loss, entering school and making friends is ideal for kids navigating new experiences."
— Shelf Awareness

Cece Bell is the author of the Newbery Honor Book and Eisner Award winner El Deafo, which received four starred reviews and was a New York Times bestseller. She is also the author of Rabbit and Robot, winner of a Geisel Honor. Cece lives with her husband, the author Tom Angleberger, in Christiansburg, Virginia. Find her online at cecebell.wordpress.com.