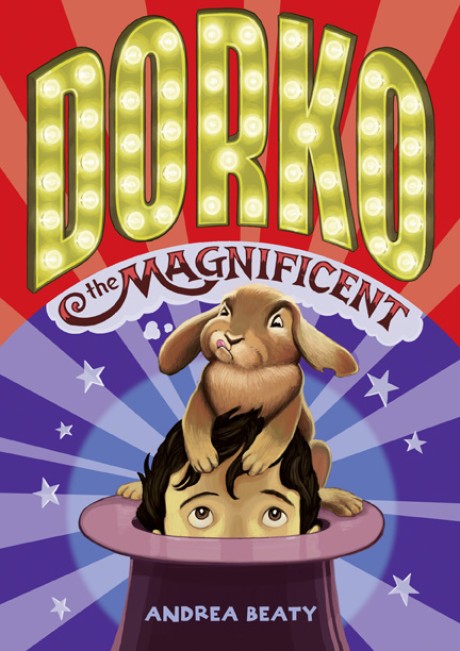 Robbie Darko is a magician. An old-school, pull-a-rabbit-out-of-your-hat-style magician. Robbie loves magic and he's good at it—sort of. Despite his best efforts, passion, and practice, something always goes wrong with his tricks, landing Robbie in trouble. Enter crotchety Grandma Melvyn, who calls everyone "Trixie" and complains about everything. When Grandma Melvyn moves in and takes over his room, Robbie discovers that she was once an internationally renowned magician and learns about the heartache that turned her into a bitter woman. Against all odds, Robbie and Grandma Melvyn form an uneasy alliance to show the world—or at least the kids of Hobson Elementary School—that he is a true magician. Shortly after a successful talent show, Grandma Melvyn performs a final disappearing act, and Robbie learns a little about the true meaning of magic.
Written with pitch-perfect middle-grade humor and unforgettable characters, this gem of a novel will stay with readers long after Dorko the Magnificent has taken his final bow.

Praise for Dorko the Magnificent
"A young would-be magician gets lessons in both stagecraft and life from a crusty elder... the supporting characters steal the show."
—Kirkus Reviews

"Short chapters keep the story moving. Robbie has impressive determination, but it is Grandma Melvyn who is the star in this moving story."
—Booklist

" A thoroughly likable middle-grade novel, offering a blend of poignancy and giggle-worthy humor, this book is a solid back-to-school read."
—The Bulletin of the Center for Children's Books

"Literature circles would work well with this title that deals with alienation, friendship, family, reconciliation, and death."
—Library Media Connection

Andrea Beaty is the author of Secrets of the Cicada Summer, Attack of the Fluffy Bunnies, When Giants Come to Play, and Iggy Peck, Architect. She lives outside Chicago with her family. Andrea often visits schools to share her love of writing with students. Learn more about her programs and her books at andreabeaty.com and threesillychicks.com.