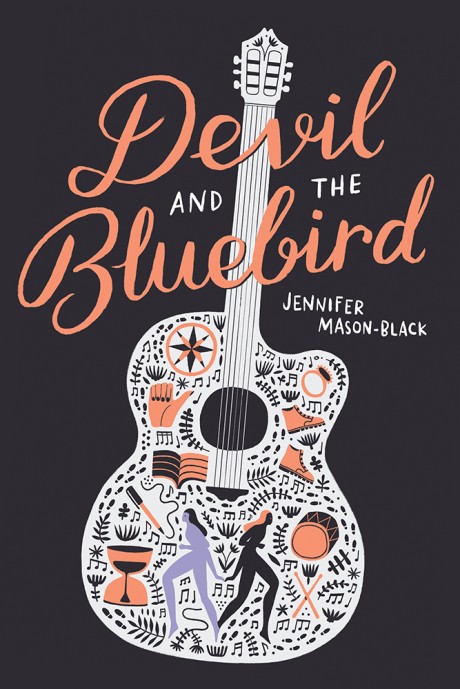 Buy
Devil and the Bluebird
By Jennifer Mason-Black

Blue Riley has wrestled with her own demons ever since the loss of her mother to cancer. But when she encounters a beautiful devil at her town crossroads, it’s her runaway sister’s soul she fights to save. The devil steals Blue’s voice—inherited from her musically gifted mother—in exchange for a single shot at finding Cass.


Armed with her mother’s guitar, a knapsack of cherished mementos, and a pair of magical boots, Blue journeys west in search of her sister. When the devil changes the terms of their deal, Blue must reevaluate her understanding of good and evil and open herself up to finding family in unexpected places.

In Devil and the Bluebird, Jennifer Mason-Black delivers a captivating depiction of loss and hope.

**STARRED REVIEW**
"A magical-realist adventure laced with folk guitar and outcast drifters unpacks the bonds of family—those we are born into and those we choose."
— Kirkus

**STARRED REVIEW**
"In Devil and the Bluebird, the universal question of a soul's worth feels uniquely American, drawing on the folk legend of the devil and Robert Johnson. Mason-Black's story lives on society's fringes, tangling around small-time musicians, lost souls and street kids, highlighting the beauty and brutality of wandering the world alone. Older teens will especially appreciate this allegory for finding one's voice, finding one's own kind of family, and the danger of playing "a tune that's not your own.""
— ShelfAwareness

“An eclectic mash-up of contemporary fiction and fantasy…Teens will enjoy this work for its colorful and memorable cast of transient characters. Fans of Andrea Seigel and Brent Bradshaw’s Everybody Knows Your Name and David Arnold’s Mosquitoland will enjoy this debut."

“The odd and intriguing concept, the southern gothic backdrop, and the inclusion of nontraditional families and LGBT characters will endear this to many. Mason-Black’s writing, lyrical and woven through with song and warmth, marks her as one worth watching.”

"This debut novel is a beautiful and lyrical story of discovering your own voice.  After each of her encounters, Blue gains understanding of the wider world and comes to learn and accept her responsibilities in both the wide world and her own smaller world.  As Blue owns her own power, she understands that some things are not taken from us; we give them away. While this is a standard message in books for teenagers, this treatment is readable, engaging, and engrossing. The glow of Blue’s success lingers. Give this to readers interested in the music industry and music in general."
— VOYA

"Old-school Weetzie Bat fans will be enthralled with this musical, meandering book brimming with magical realism and all sorts of ways to find and give love."
— BCCB

"The twists and turns that Blue's journey takes are not predictable or standard, though eventually they begin to seem more than a little twisted up with some kind of destiny (and as it turns out, more than one devil). When she eventually finds herself in a place where she must confront the truth about why her family fell apart, it feels like we were headed there all along without knowing it. Even though the road trip genre goes back all the way to Homer and has been rehashed a thousand times, Blue's journey feels fresh and surprising. It conjures up a cold wind, a warm hearth, and the sweet jangle of guitar strings."
— NPR

"Debut author Jennifer Mason-Black's prose is fittingly lyrical, and her narrative always takes the most devilish of turns."
— Bookpage

Jennifer Mason-Black has published short stories in The Sun, Strange Horizons, Fireside Fiction, and Daily Science Fiction, among other publications. Devil and the Bluebird is her debut novel. She lives in Massachusetts. jennifermasonblack.com.