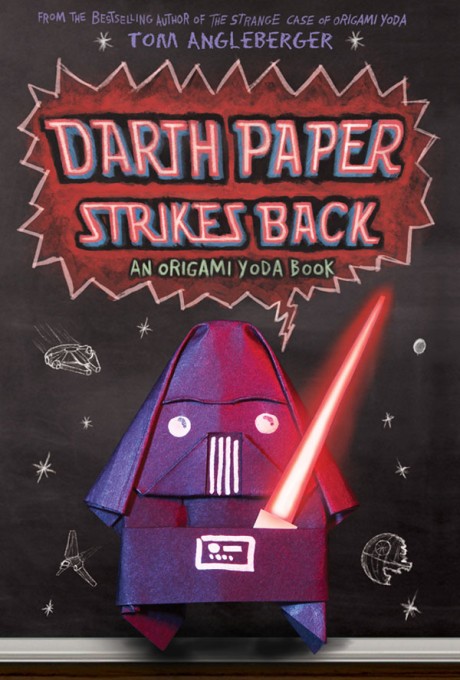 . . . Something amazing happened. A weird kid named Dwight made an origami finger puppet of Yoda that gave great advice. Most of the sixth graders were convinced he was using the Force.

But now, a year later, it's a dark time at McQuarrie Middle School. Dwight has been suspended and may be expelled, which means no more Origami Yoda. Even worse, Darth Paper, a puppet created by Dwight's nemesis, Harvey, has taken Yoda's place. He spews insults and evil and just may have been responsible for getting Dwight kicked out. Now the kids of McQuarrie are trying to build a case for keeping Dwight at their school. This is their case file.

Includes instructions for folding your own Origami Yoda.

**STARRED REVIEW**
“Angleberger’s just-as-funny follow-up to The Strange Case of Origami Yoda delves deeper into the mystery of the helpful paper Yoda in a satisfying tale of friendship and just resistance to authority.Pitch-perfect middle-school milieu and enough Star Wars references (and laughs) to satisfy fans and win new ones.”
Kirkus Reviews, starred review —

“In this imaginative sequel . . . author Tom Angleberger has his finger puppet squarely on the erratic pulse of middle-school life, with its shifting allegiances, squeals, moans and misgivings.”
Washington Post —

“As with this story’s predecessor, the well-observed middle-school dynamics (and Angleberger’s sharp sense of humor) are greatly amplified by the book's design, which includes faux wrinkled pages, abundant doodles, and other scrawled marginalia. It's a natural step up from the Wimpy Kid series, with more text and narrative complexity, but just as much on-target humor and all-around fun.”
Publishers Weekly —

“Honest, funny, and immensely entertaining . . . Based on the positive reception Origami Yoda has received, kids will be clamoring for this sequel. They won’t be disappointed.”
School Library Journal —

“The Force is with Tom Angleberger in this sequel to his funny and clever novel/comics hybrid, The Strange Case of Origami Yoda."
Shelf Awareness —

“Darth Paper offers further proof that Angleberger really understands middle-schoolers and the daily dramas that engulf them, while still finding the humor inherent in their situations."
Scripps News —

Tom Angleberger’s Strange Case of Origami Yoda was hailed as “delightful” by the New York Times and called “the most original novel of the year” by the Boston Globe. Angleberger is also the author of Horton Halfpott. His website is OrigamiYoda.com. He lives in Christianburg, Virginia, with his wife, the author-illustrator Cece Bell.