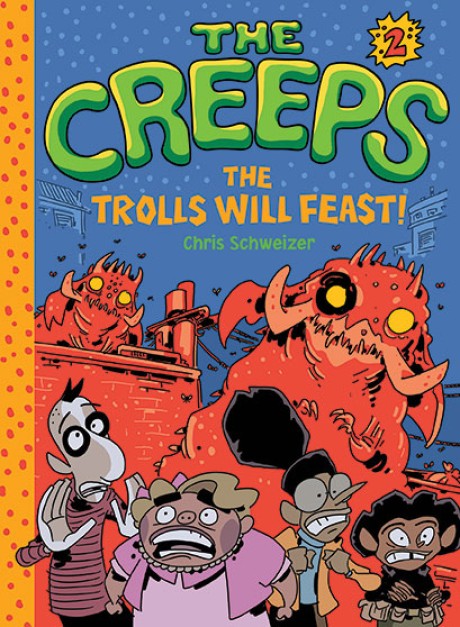 Book 2: The Trolls Will Feast!

In Pumpkins County, monster attacks are a common enough occurrence, but when Jarvis is attacked by an invisible monster, the Creeps know they’ve found their next case. Through Mitchell’s extensive monster expertise, the gang identifies the culprit: a Troll. Unfortunately, Trolls travel in packs. They hibernate together, and they feast on humans together. The tastiest type of human? Those who have been marinating in their own stress hormones. And there’s an awful lot of stress to go around these days, what with the town’s gossip site spewing out nonstop misinformation and alarmist messages. Could the Trolls be behind the county-wide breakdown in communication? With the town’s anxiety levels soaring off the charts, it’s up to the Creeps to find out—before the Trolls’ big feast.

This hilarious graphic-novel series celebrates the power of underdogs and the importance of finding your tribe—even if your tribe is weird and just, well . . . creepy.

Chris Schweizer is the author/illustrator of the Crogan Adventures graphic-novel series, which was nominated for two Eisner Awards and named to the YALSA Great Graphic Novels for Teens list. He received his MFA from Savannah College of Art and Design. Schweizer lives in Madisonville, Kentucky, with his wife and daughter. www.chrisschweizer.com.