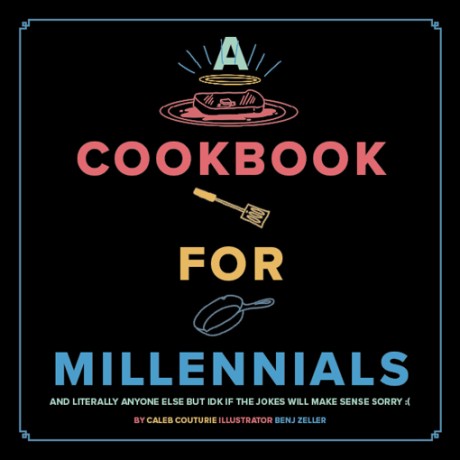 A Cookbook for Millennials

And Literally Anyone Else but IDK If the Jokes Will Make Sense Sorry :(

Look, your parents can’t cook for you forever and you can’t have every meal delivered!

Is avocado toast your primary food group? Do you own a small family of succulents? Do you suck at cooking but thrive at brunch? Well, you might be a millennial who would enjoy this cookbook. You might not even be a millennial! That’s okay. You’ll get more than 30 delicious recipes that anyone can easily conquer. Buy now! Or don’t. No pressure.

Caleb Couturie developed a love for cooking at a young age. Once he overcame his fear of bacon grease, it was only uphill from there. He was trained in the kitchen by world-famous chefs (on YouTube, but let’s not split hairs), and his culinary taste can be described as “bold, creative, and probably excessive.” When he’s not exploring his body’s limitations with dairy, Couturie works as a copywriter in advertising. Just think of Jon Hamm in Mad Men, but less successful, talented, and handsome. Benj Zeller is lactose intolerant but will risk it all for a slice of Costco pizza. He’s also a big fan of bad ideas when it comes to food, and his dream is to someday eat spicy wings on Hot Ones. (Not for the fame, just for the thrills.) When he’s not putting his digestive system through hell, he works as an art director and designer in Portland, Oregon.