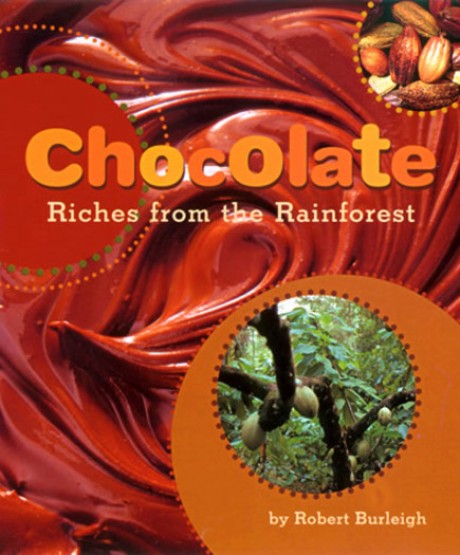 Riches from the Rainforest

Chocolate milk, chocolate fudge, chocolate frosting on chocolate cake. Children love chocolate, and this book, filled with fun facts, introduces them to the flavor's exotic story. It begins in the rainforests of South America with the bitter seeds of a strange tree. The Aztecs served their human sacrifices chocolate mixed with blood. Conquistadors sent chocolate home to Spain where, sweetened with sugar, it became the rage among aristocrats. But not until 1847 was the first solid chocolate candy made, and only in the past century has the sacred treasure of ancient kings become the popular treat of millions. Profusely illustrated and meticulously researched, Chocolate accompanies a major exhibition that travels from Chicago's Field Museum to 10 other sites.

Robert Burleigh has written a range of award-winning books for children, including nonfiction, fiction, and poetry. Booklist says, "Burleigh paints mesmerizing word pictures on the page." He lives in Chicago.