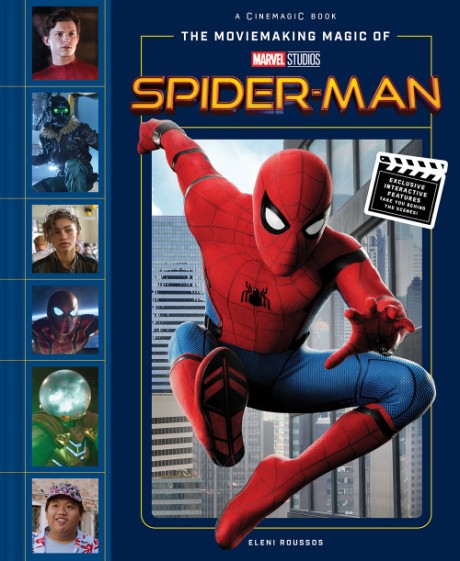 Go behind the scenes of Marvel Studios’ Spider–Man films in this immersive and interactive book!

Get ready to swing into the creation of the movies starring everyone’s favorite web-slinger—Spider-Man! From his first appearance in Captain America: Civil War to the latest installment, Spider-Man: No Way Home, explore the behind-the-scenes magic of how Marvel Studios brought your friendly neighborhood Super Hero to life for the big screen! Pull back the curtains to reveal it all—from Spidey’s homemade web-shooters to Mysterio’s modified drones and all of the adrenaline-pumping battles in between.

This collectable book features diagrams, photographs, concept sketches, and more! Bonus sections reveal the magic of some of the films’ most memorable moments, characters, heroes, and villains using special interactive elements. See how filmmakers breathed new life into the humble comic book character and transformed him into the larger-than-life icon and phenomenon fans across the globe adore.

Eleni Roussos is an author and entertainment writer based in Los Angeles. After working behind the scenes on some of today’s biggest blockbusters, she transitioned into writing about them. Roussos is primarily known for her film-companion works, notably penning several volumes of Marvel’s The Art of the Movie book series.