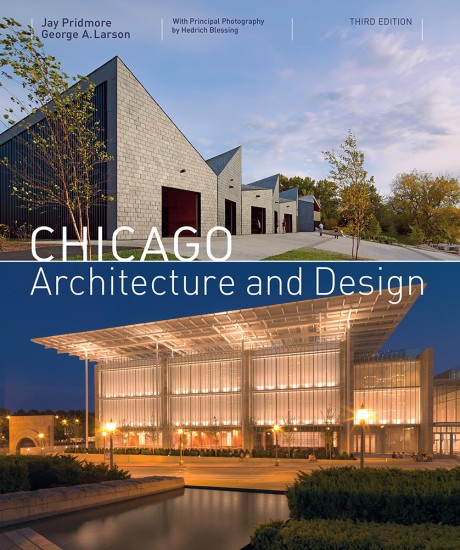 By Jay Pridmore and George A. Larson
Photographer Hedrich Blessing

The birthplace of the skyscraper, Chicago is famous for an architectural tradition that has influenced building around the globe. It is the cradle of modern architecture. It gave rise to the urban office building and to the flowing, open floor plans of today’s homes. Chicago Architecture and Design chronicles the city’s architecture from the 19th through the early 21st century: from the structural simplicity of Chicago School commercial building to the low-slung Prairie School house, from the streamlined Art Deco skyscraper to the minimalist Miesian tower of glass and steel, and all the way through to the strikingly original, diverse designs of the present day’s second modern period. It examines the evolution of modern architecture in the context of broader historical, social, technological, and artistic currents and explores innovations that pushed buildings ever higher. This third edition adds 10 new buildings from the last decade, including Renzo Piano’s Modern Wing of the Art Institute, John Ronan’s Poetry Foundation, and Helmut Jahn’s Mansueto Library at the University of Chicago.

Jay Pridmore is a freelance writer and critic. George A. Larson is chairman and director of design of Larson Associates, Chicago and New York. Hedrich Blessing is one of the country's premier architectural photography studios.