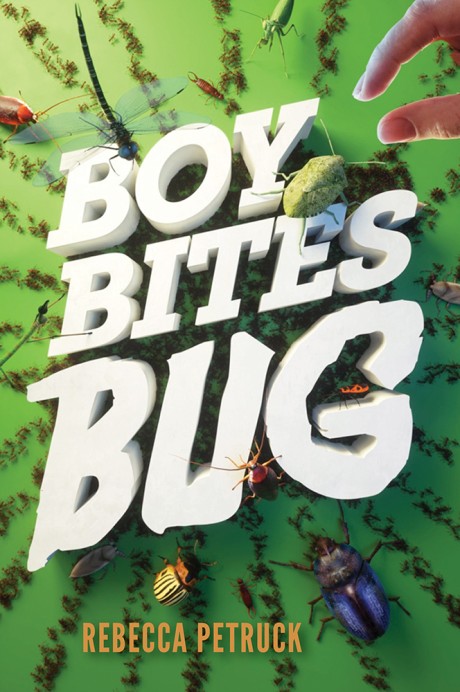 Will didn’t plan to eat a stinkbug. But when his friend Darryl called new kid Eloy Herrera a racial slur, Will did it as a diversion. Now Will is Bug Boy, and everyone is cracking up inventing insect meals for him, like French flies and maggot-aroni and fleas.

Turns out eating bugs for food is a real thing called entomophagy. Deciding that means he can use a class project to feed everyone grasshoppers, Will bargains for Eloy’s help in exchange for helping him with wrestling, but their growing friendship only ticks off Darryl more.

Will may have bitten off more than he can chew as crickets, earthworm jerky—even a scorpion—end up on his plate, but insects are the least of his problems. When things between Darryl and Eloy heat up, Will wrestles with questions of loyalty and honor—and learns that maybe not all friendships are worth fighting for.

**STARRED REVIEW**
"A tale that is funny, perceptive, and topical in more ways than one."
Booklist —

"The straightforward and uncluttered style will please lovers of the “Wimpy Kid” series . . . A sure bet for reluctant readers, pranksters, and budding entomophagists (bug-eaters).?"
School Library Journal —

"Petruck successfully weaves such important themes as bias, solidarity, and coming to recognize one's own privilege and prejudice together, delivering them in a plot that is so very middle school (bugs! sports!) that it will hopefully appeal to a broad audience who might not otherwise choose to read about these crucial topics. An admirable feat that entertains even as it instructs."
Kirkus Reviews —

Rebecca Petruck worked at Condé Nast in marketing before returning to school to earn an MFA in creative writing. She lives in Creston, North Carolina.