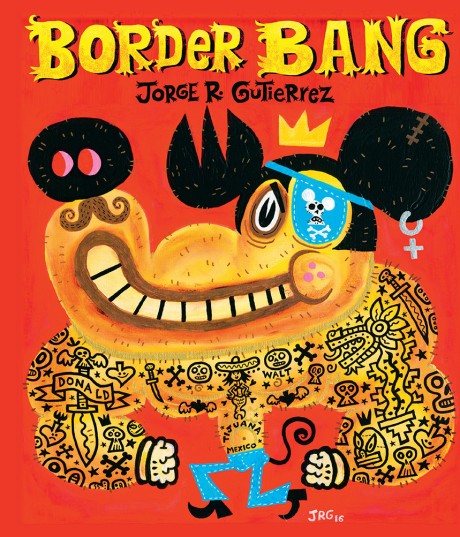 The acclaimed director of The Book of Life returns with an original art book celebrating the mix between American pop culture and Mexican folklore. This bilingual (English-Spanish) book is a loving reflection of Mexican artist Jorge R. Gutiérrez’s childhood narrative of the re-appropriated pop culture references he grew up with, seeing them on his daily walks across the Mexico–U.S. border. Gutiérrez created more than 100 paintings in his unique style, each proposing a bootleg version of popular characters, artists, and musicians, from Spiderman and the Powerpuff Girls to David Bowie and Tupac Shakur; homage is also paid to Mexican icons, including Frida Kahlo, Pancho Villa, Lucha Libre, and the 1986 Mexican World Cup mascot.
As the new American administration’s politics raises awareness about migrants all over the world, Border Bang is a love letter to diversity and cross-cultural dialogue,with appeal to fans of both American pop culture and traditional Mexican folklore.

Jorge R. Gutiérrez is an Emmy Award-winning animator, painter, writer, and director born in Mexico City and raised in Tijuana. Gutierrez, a CalArts BFA & MFA grad, is famous for his films, cartoons, and paintings inspired by his deep love for Mexican pop and folk culture. He and his wife, Sandra Equihua, created the multiple Emmy Award-winning animated television series, El Tigre, The Adventures of Manny Rivera for Nickelodeon. In 2014 Gutierrez co-wrote and directed the Golden Globe-nominated film The Book of Life produced by Guillermo del Toro for 20th Century Fox. Most recently he directed the Emmy nominated VR short Son of Jaguar for Google Spotlight Stories.