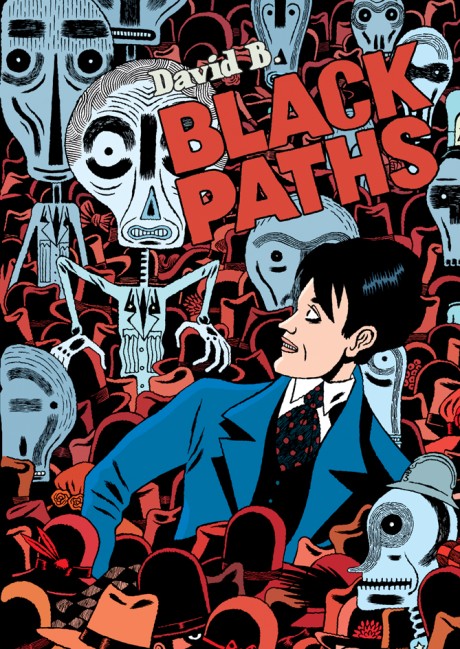 When the Austro-Hungarian Empire disintegrated after World War I, control of the Adriatic port of Fiume (now Rieka, Croatia) was hotly disputed. Enter "Pirate King" Gabriele d'Annunzio, an Italian poet who stormed the city with 3,000 Italian nationalists. D'Annunzio declared Fiume a free republic and himself commander. He envisioned a utopian city-state, but Fiume quickly became a surreal center of violence, looting, and decadence, with shades of the Fascist movement to come. Acclaimed comics artist David B. uses this real event as a backdrop and seamlessly weaves history, hysteria, and highly stylized art into the tragic love story of a beautiful torch singer and a young soldier haunted by the horrors of trench warfare.

"David B. draws with the chaotic, high-contrast style he used in his best-known work, Epileptic, to capture the distressed, surreal mood of artists struggling to run the world." —Publishers Weekly, Starred Review

"As with Epileptic, the art in Black Paths is twisted but the writing is straight, charting a clear narrative path through the insanity of Italy in the year following World War I…" —The A.V. Club

"Here's a book that has everything going for it." —Comic Book Resource's Robot6 blog

"Black Paths is a fascinating study of the strange convergence of anarchy, fascism and art a century ago." —The Milwaukee Shepherd Express

David B. (Pierre-François Beauchard) is a prominent French comics artist whose graphic memoir, Epileptic, was nominated for an Eisner and won an Ignatz Award, as well as top prizes at the Angoulême International Comics Festival. He is also the illustrator of Best of Enemies: A History of U.S. and Middle East Relations. He lives in Paris, France.