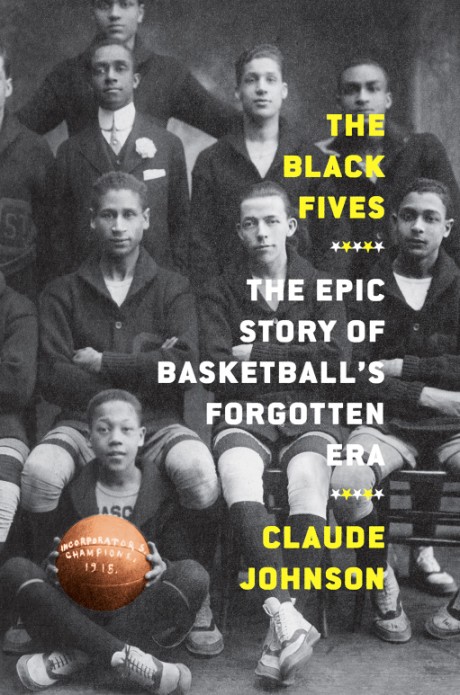 A groundbreaking, timely history of the largely unknown early days of Black basketball, bringing to life the trailblazing players, teams, and impresarios who made the game

From the introduction of the game of basketball to Black communities on a wide scale in 1904 to the racial integration of the NBA in 1950, dozens of African American teams were founded and flourished. This period, known as the Black Fives Era (teams at the time were often called “fives”), was a time of pioneering players and managers. They battled discrimination and marginalization and created culturally rich, socially meaningful events. But despite headline-making rivalries between big-city clubs, the savvy moves of innovative businessmen, and the undeniable talent of star players, this period is almost entirely unknown to basketball fans.

Claude Johnson has made it his mission to change that. An advocate fiercely committed to our history, for more than two decades Johnson has conducted interviews, mined archives, collected artifacts, and helped to preserve this historically important African American experience that otherwise would have been lost. The Black Fives is the result of his work, a landmark narrative history that braids together the stories of these forgotten pioneers and rewrites our understanding of the story of basketball.

"It was an honor to have Claude speak to the Thunder organization, introducing our players and staff to the incredible history and persistence of the Black Fives. As their foremost historian, Claude's passion and rigor for the story of these people and teams are inspiring. Listening and learning from Claude's research and expertise is an important step in continuing to appreciate the legacy of these pioneers of the sport that brings to many people together."
Sam Presti, executive vice president and general manager, Oklahoma City Thunder —

"For a game that has meant so much to the world, Claude Johnson somehow presents a definitive account for a part of basketball's history that for so long was kept away from us. Claude is a superhero storyteller, and this book is a bona fide superpower."
Justin Tinsley, author of It Was All a Dream: Biggie and the World that Made Him —

"Claude Johnson has done almost as much to retrieve a missing era in our history––that of the Black Fives––as all the writers, filmmakers, and scholars working on the Negro Leagues combined were able to accomplish in telling Black baseball's story. The Black Fives is a deftly crafted, prodigiously researched, and groundbreaking book that shows not only why Black basketball mattered during the sport's segregated past, but what it matters today."
Rob Ruck, professor or sport history, University of Pittsburgh, and author of Tropic of Football: Th —

Claude Johnson is a historian and founder of the Black Fives Foundation. He has a BS in civil engineering and economics from Carnegie Mellon and an MS in mechanical engineering from Stanford. During a 20-year career in corporate America, Johnson held management and executive positions at IBM, American Express, NBA Properties, Nike, Phat Farm, and Benetton Sportsystem. He left to become a stay-at-home dad to his three sons, two of whom are now Division I college football players (the third is a Division I high school basketball recruit). He lives in Greenwich, Connecticut.