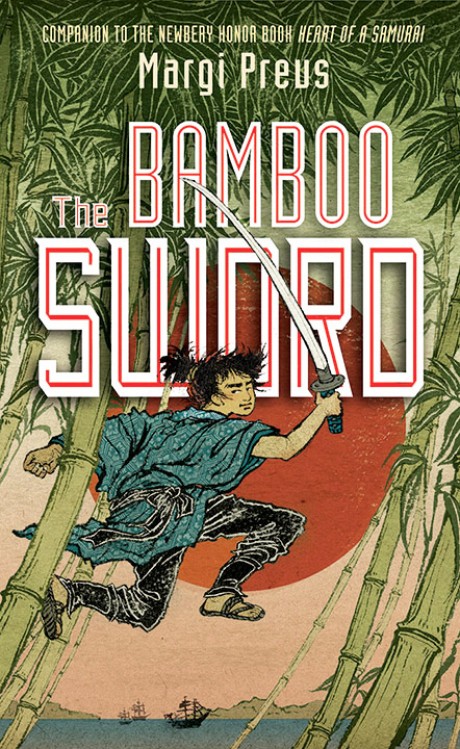 Set in 1853 in Japan, this novel follows Yoshi, a Japanese boy who dreams of someday becoming a samurai. Unfortunately, as part of the serving class, Yoshi can never become a warrior. He is taken up by Manjiro, the protagonist of Preus’s Heart of a Samurai, and becomes his servant and secret watchdog. Meanwhile, Commodore Matthew Perry and his USS Susquehanna squadron of steamships arrive in Edo Bay demanding “diplomatically” that Japan open its ports to foreign trade. Aboard the commodore’s flagship is a cabin boy, Jack, who becomes separated from his American companions while on shore. When he and Yoshi cross paths, they set out on a grand adventure to get Jack back to his ship before he is discovered by the shogun’s samurai.

"Middle-grade readers eager for adventure with a solid grounding in history will be enchanted."
Booklist —

STARRED REVIEW
"Thanks to the lively, warm, and witty storyteller's voice and the vivid, sensuous depictions of the katana swish and kimono swirl of 19th-century Japan, readers will feel immersed in this tumultuous time in Japanese history."
Kirkus Reviews —

"Bringing life to historical events not often addressed in children’s literature, this rich, multilayered novel will be a treat for fans of Heart of a Samurai."
School Library Journal —

Margi Preus is the author of the acclaimed novels West of the Moon, Heart of a Samurai, and Shadow on the Mountain. She also writes and co-writes plays, sketches, and adaptations for theater. She lives in Duluth, Minnesota.