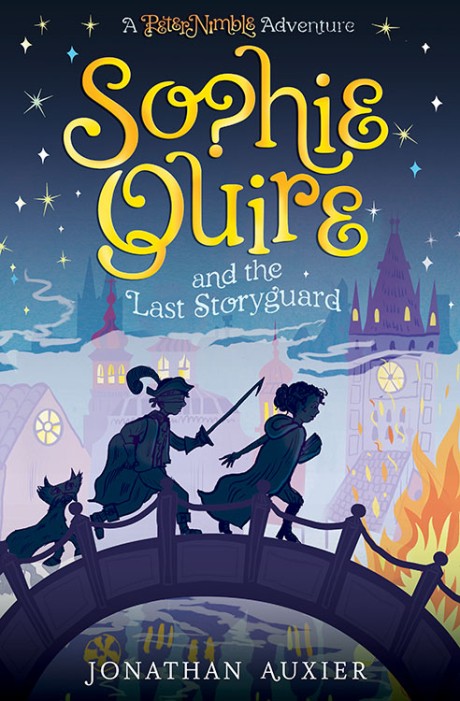 It’s been two years since Peter Nimble and Sir Tode rescued the kingdom of HazelPort. In that time, they have traveled far and wide in search of adventure. Now they have been summoned by Professor Cake for a new mission: To find a twelve-year-old bookmender named Sophie Quire.

Sophie knows little beyond the four walls of her father’s bookshop, where she repairs old books and dreams of escaping the confines of her dull life. But when a strange boy and his talking cat/horse companion show up with a rare and mysterious book, she finds herself pulled into an adventure beyond anything she has ever read.

**STARRED REVIEW**
"Rife with suspense, droll and poignant moments, and the occasional brutal confrontation, Auxier’s worthy, absorbing follow-up is also a thought-provoking look at classic literary tropes, including their fanciful, sometimes darker, nature and themes... Ultimately, this affecting, compelling story stands on its own, embodying and highlighting the power and impact of tales well told—and why they endure."
— Booklist

**STARRED REVIEW**
“With Auxier’s exceptional character development, even minor characters display vulnerability, interesting quirks, and depth. The major characters, even the villains, shine, with layers revealed through actions and very natural dialogue.”
— Bulletin of the Center for Children's Books

**STARRED REVIEW**
"This novel should be in the hands of every human young enough at heart to be enchanted by the written word."
— Kirkus Reviews

**STARRED REVIEW**
“In the grand tradition of Cornelia Funke’s Inkheart and John Stephens’s The Emerald Atlas comes this companion novel to Auxier’s Peter Nimble and His Fantastic Eyes. …This author so clearly views books as the elixir of life, and this conviction oozes out of the text….A fantastically done fantasy that will be enthusiastically embraced by middle grade bibliophiles.”
— School Library Journal

"Auxier has created an electrifying and extraordinary story. Middle grade readers will likely wish to reread to appreciate the wonder that is this book."
— School Library Connection

Jonathan Auxier is the New York Times bestselling and critically acclaimed author of Peter Nimble and His Fantastic Eyes, The Night Gardener, Sophie Quire and the Last Storyguard, and Sweep. He lives with his family in Pittsburgh, Pennsylvania. Find him online at thescop.com.