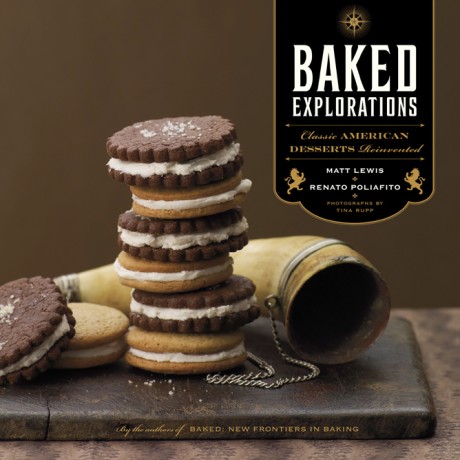 Matt Lewis and Renato Poliafito’s 2008 Baked was published to national critical acclaim and raved about across the blogosphere. Since then, their profile has gotten even bigger, with continued praise from Oprah and Martha Stewart; product availability in every Whole Foods across the U.S.; and a new bakery in Charleston, South Carolina, with even more traffic than their original Brooklyn location.

Now, in Baked Explorations, the authors give their signature “Baked” twists to famous desserts from across the country. Here is their take on our most treasured desserts: Banana Cream Pie, Black & White Cookies, Mississippi Mud Pie, and more—from the overworked to the underappreciated. Readers will love this collection of 75 recipes from breakfast treats to late-night confections and everything in between.

"They might look like another pair of fresh-faced Brooklynites (retro tie and mustache? check), but Matt Lewis and Renato Poliafito, the owners of the Baked sweet shops in Brooklyn and Charleston, are media-savvy butter fiends . . . Those whoopie pies? Four sticks of buttery fun. Oh to be young, decadent and baked in Brooklyn."
-The New York Times

Matt Lewis and Renato Poliafito left their day jobs in advertising five years ago to open their bakery, Baked, in Brooklyn, NY, to immediate praise from fans across the country. The authors have been featured on Oprah, the Today show, the Food Network, and Martha Stewart. Their first book, Baked, was an IACP award nominee. Lewis and Poliafito live in New York City.