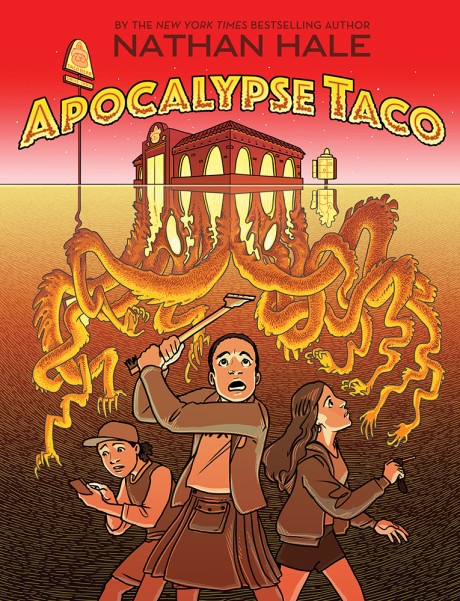 A sinister drive-through threatens to end the world—and three kids in a beat-up truck are humanity’s only hope!

It’s the night before dress rehearsal, and the school theater troupe is working late and very hungry. Eleven-year-old twins Axl and Ivan—along with their sixteen-year-old driver, Sid—volunteer to make a late-night fast-food run. At the drive-through, their tacos start to . . . move. And they don’t seem friendly. Even after they get rid of the food, the world around them isn’t quite right. There are strangely moving cars, buildings, and people—and they seem intent on swallowing everything in their path. Now the trio will have to use their wits, their truck, and even their windshield scraper to escape . . . before they’re replaced by monstrous versions of themselves!

"Hale positively revels in the weirdness of his premise. The two-color orange palette he uses adds to the surrealistic feeling of the illustrations . . . A well-balanced mix of sci-fi, horror, and humor."
Kirkus Reviews —

"Perfect for fans of weird fiction, with a visual style that will appeal to fans of horror comics."
Booklist —

"Hale has done it again—another graphic novel that offers a terrific blend of the eerie and the humorous that will captivate new readers and delight dedicated fans."
School Library Journal —