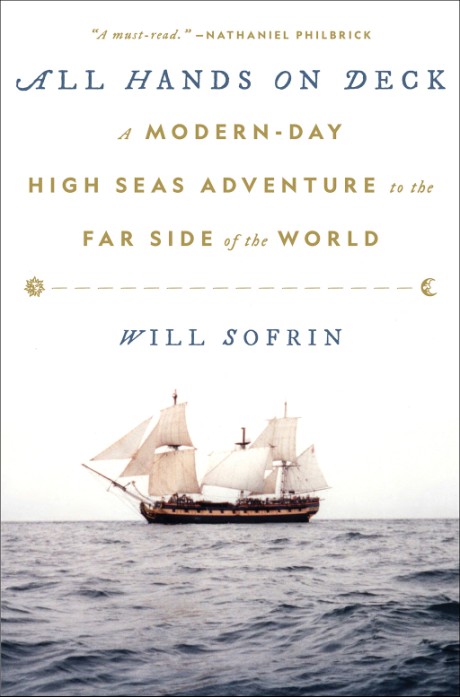 All Hands on Deck

A maritime adventure memoir that follows a crew of misfits hired to sail an 18th-century warship 5,000 miles to Hollywood

In the late 1990s, Patrick O’Brian’s multimillion-copy-selling historical novel series—the Aubrey–Maturin series, which was set during the Napoleonic Wars—seemed destined for film. With Russell Crowe as Jack Aubrey and Paul Bettany as Stephen Maturin, the production only needed a ship that could stand in for Lucky Jack’s HMS Surprise, with historical accuracy paramount. The filmmakers found the Rose, a replica of an 18th-century ship that would work perfectly. Only there was one problem: the Rose was in Newport, Rhode Island, not in Southern California, where they would be filming. Enter a ragtag crew of thirty oddballs who stepped up for the task, including Will Sofrin, at the time a 21-year-old wooden-boat builder and yacht racer, who joined as the ship’s carpenter.

All Hands on Deck is Sofrin’s memoir of the epic adventure delivering the Rose to Hollywood. It’s a story of reinvention, of hard work on the high seas, of love, and of survival. The Rose was an example of the most cutting-edge technology of her era, but in the 21st century, barely anyone had experience sailing it. The crew effectively went back in time, brought to life the old ways of a forgotten world, and barely lived to tell the tale. Just a few days in, a terrifying hurricane-strength storm nearly sank the Rose, and later, a rogue wave caused a nearly fatal dismasting. And the ups and downs weren’t limited to the waves—with the crew split into factions, making peace between warring camps became necessary, too, as did avoiding pirates and braving the temptations of shore leave. All Hands on Deck is a gripping story of an unforgettable journey and a must-read for fans who adore O’Brian’s novels and the dramatic film adaptation of Master and Commander.

“A thrilling account. Readers needn’t have ever set foot on a boat to enjoy this story.”

“Will Sofrin takes us on an unbelievable ride on the high seas . . . I have played pretend
on the open ocean. Will Sofrin has lived the real experiences and survived to tell the tale.”
Dan Shotz, executive producer of the Emmy Award-winning Starz series Black Sails —

“Like many a sailor, Will Sofrin is a wicked good storyteller, with a jaundiced eye, an impish sense of humor, and a nose for the telling detail. Lovers of the Aubrey-Maturin novels and the movie Master and Commander: The Far Side of the World will find his account a worthy addition to the salty O’Brian world we love. You don’t want to miss it!”
Dean King, national bestselling author of A Sea of Words, Patrick O’Brian: A Life Revealed, and Skel —

“While researching for paintings I have probably read hundreds of ships' logbooks from the glory days of the Royal Navy, just as Patrick O'Brian did, so I know what things looked like from the quarterdeck (there are very, very few surviving accounts from the crews). But with this book Will Sofrin gives us a great insight into the intense working life of the lower deck, now just as it was then, constantly battling the elements, gear failure, and sometimes each other.”
Geoff Hunt, marine artist and illustrator of the Patrick O'Brian book covers —

“Will Sofrin’s thrilling account of the eventful, sometimes terrifying delivery of the tall ship that starred in Peter Weir’s adaptation of Patrick O’Brian’s The Far Side of the World is a must-read. Even if you haven’t seen the movie or read O’Brian’s novels, this is an adventure story of the highest order.”
Nathaniel Philbrick, author of the National Book Award–winning In the Heart of the Sea and Travels w —

“All Hands on Deck is a fascinating read: a combination of a travelogue to distant lands, maritime history, and adventures and misadventures on the high seas. Through it all, author Will Sofrin is learning to live in tight and uncomfortable quarters on a tall ship alongside crewmembers of very divergent personalities. They ultimately form a team with the common goal of staying alive on an unforgiving and unpredictable ocean.”
Michael Tougias, New York Times bestselling author of Extreme Survival and A Storm Too Soon —

“In the canon of classic literature is a disproportionate volume of epic tales of the sea. Almost invariably these tales focus on a young, green hand signing aboard a ship, casting off, and heading out into the great salty unknown for the first time. In All Hands on Deck, by Will Sofrin, we have a latter-day tale of a seagoing apprenticeship under sail. Lucid, personal, funny, and instructive, it could be read next to Two Years Before the Mast with no apologies. Ships and times may have changed, but the sea and young souls drawn to the sea have changed but little. This story is a worthy tale of a young man and a ship and the sea. I enjoyed it immensely.”
Captain Daniel Moreland —

“People love tall ships, but the lives and culture of modern tall ship sailors are a mystery to most who attend sea festivals and the like. In All Hands on Deck, Will Sofrin accomplishes two things: He brings to light the real world of today’s traditional mariners while telling the thrilling tale of how he himself was plunged into that world. With accomplished and insightful storytelling, Sofrin recounts an extraordinary, often hair-raising voyage, and in doing so reveals to readers the lives of the modern-day sailors of the big rigs.”
James L. Nelson, award-winning author of the Norsemen Saga and Benedict Arnold’s Navy —

Will Sofrin is a master shipwright who has taught at MIT and has built boats for Billy Joel and Estée Lauder. As a former professional sailor and licensed captain, he has tracked more than 30,000 blue-water miles. In 2014, he relocated to Los Angeles and launched a design firm that specializes in luxury residential development. He continues to race sailboats and explores the coast of California with his wife and seven-year-old daughter. This is his first book.