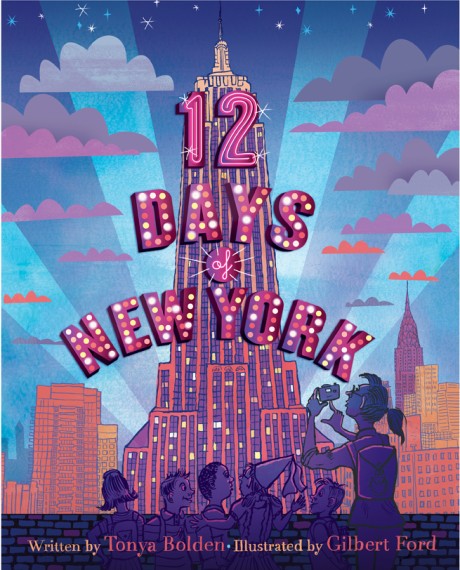 When a group of students wins a trip to New York City, accompanied by their teacher, they aren't sure where to start. Soon enough, they're roaming the city, from the Statue of Liberty to Times Square, from Chinatown to Central Park, in order to discover what makes New York one of the greatest cities on Earth.
Structured like the popular song "The Twelve Days of Christmas," Tonya Bolden's text captures the fun and fast-paced spirit of New York, while Gilbert Ford's illustrations embody its dynamic beauty and odd quirks. The book includes a map of all five boroughs of the city highlighting kid-friendly places to see when you visit.

Praise for 12 Days of New York
"Ford's illustrations, rendered in a variety of media including India ink, gouache, dyes and Photoshop, depict the city in bright, glowing tones that are cartoonlike but manage to capture the essence of the people and places."
—Kirkus Reviews

"Richly colored cartoon illustrations, with a dialogue bubble here and there for added humor, depict the wide-eyed characters and their surroundings with a fair amount of detail without overwhelmingâ€¦ A jolly jaunt introducing a few classic Big Apple landmarks."
—Booklist