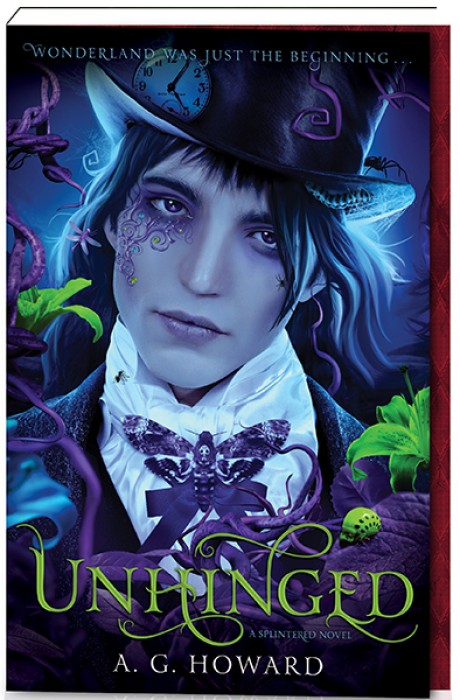 Alyssa Gardner has been down the rabbit hole. She was crowned Queen of the Red Court and faced the bandersnatch. She saved the life of Jeb, the boy she loves, and escaped the machinations of the disturbingly appealing Morpheus. Now all she has to do is graduate high school.
That would be easier without her mother, freshly released from an asylum, acting overly protective and suspicious. And it would be much simpler if the mysterious Morpheus didn’t show up for school one day to tempt her with another dangerous quest in the dark, challenging Wonderland—where she (partly) belongs.
Could she leave Jeb and her parents behind again, for the sake of a man she knows has manipulated her before? Will her mother and Jeb trust her to do what’s right? Readers will swoon over the satisfying return to Howard’s bold, sensual reimagining of Carroll’s classic.

Read all the books in the New York Times bestselling Splintered series: Splintered (Book 1), Unhinged (Book 2), Ensnared (Book 3), and Untamed (The Companion Novel).
Get books 1 through 3 in the Splintered boxed set, available now!

Praise for Unhinged
"I really enjoyed the first book of this series, but Unhinged cranks the Wonderland experience up to 11. It's just ... WOW! The last few scenes dangle Alyssa's next adventure with shockers enough that I found my jaw needing a bit of assistance in coming off the floor. Write quickly, A.G. Howard! I need that next book!"
--USA Today

"As intense, dark, and weird as the first volume, this worthy sequel creates a parallel narrative that brings the action out of Wonderland and into Alyssa’s hometown."
--The Bulletin of The Center for Children’s Books

"A dark beauty fills the novel's pages, which will mesmerize teens with a taste for magic, romance or suspense. Unhinged lays the groundwork for a third book where anything could happen--it is Wonderland, after all."
--Shelf Awareness