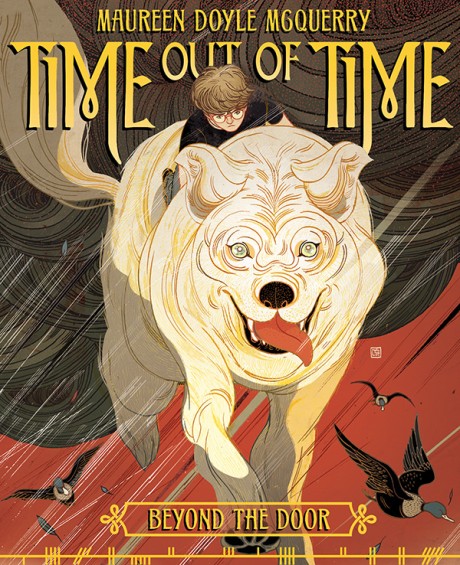 Time out of Time

Book One: Beyond the Door

Beyond the Door, the first in the Time Out of Time duet from Maureen Doyle McQuerry, weaves a compelling coming-of-age story with fantasy and mythology. With his love of learning and the game of Scrabble, Timothy James feels like the only person who understands him is his older sister, Sarah, and he’s fairly certain nothing interesting will ever happen to him. But one night, while his parents and sister are away, the door opens, and mythical creatures appear in his own living room! Soon, a mystery of unparalleled proportions begins to unfold, revealing an age-old battle of Light against Dark, and Timothy must embark on a quest to prevent the Dark from controlling the future and changing the past. But he can’t complete the quest alone. Timothy has to team up with his sister and the school bully, Jessica, to face an ancient evil, and in the process, this unlikely trio discover they are each more than meets the eye.

"McQuerry smoothly blends adventure, coming-of-age, and mystery with a mythological world where special academic and problem-solving talents
are required assets rather than nerd-bait for bullies. The characters are charming, and the quirky, supernatural good guys are compassionate and forgiving."
--VOYA

"A promising start to a fantasy series mines the rich ore of Celtic mythology and propels a young boy into cosmic battle."
--Kirkus Reviews

"A sense of wonder and worry permeates the narrative, evocative of The Dark Is Rising or the work of Neil Gaiman, and the cliffhanger ending will leave readers clamoring for more."
--Publishers Weekly

"Fantasy addicts will find plenty to like in Beyond the Door, and it is beautifully designed with Ogham code (early Irish alphabet) at the bottom of the pages for kids to decipher while they are waiting for the next instalment."
--School Library Journal

Maureen Doyle McQuerry is an award-winning poet, author, and teacher. She has taught for 20 years, specializing in young adult literature and writing. She has published two nonfiction books and numerous poems, and was the 2000 McAuliffe Fellow for Washington State. She is the author of The Peculiars. She lives in Richland, Washington.