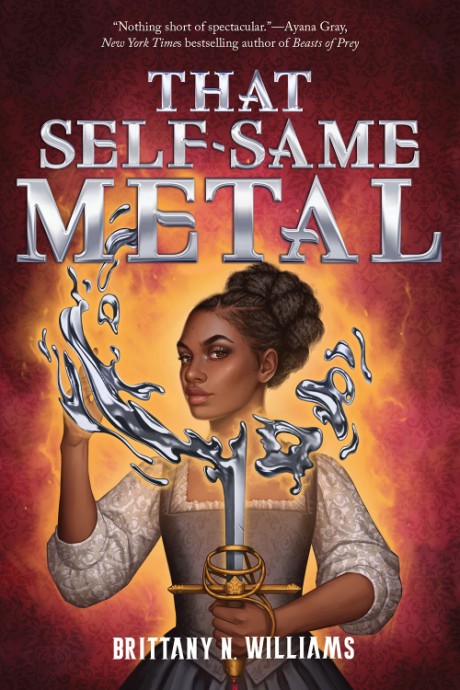 A stunning YA fantasy debut, perfect for fans of Holly Black and Justina Ireland, about a Black girl (and sword expert) fighting a Fae uprising in Shakespearean London

Sixteen-year-old Joan Sands is a gifted craftswoman who creates and upkeeps the stage blades for William Shakespeare’s acting company, The King’s Men. Joan’s skill with her blades comes from a magical ability to control metal—an ability gifted by her Head Orisha, Ogun. Because her whole family is Orisha-blessed, the Sands family have always kept tabs on the Fae presence in London. Usually that doesn’t involve much except noting the faint glow around a Fae’s body as they try to blend in with London society, but lately, there has been an uptick in brutal Fae attacks. After Joan wounds a powerful Fae and saves the son of a cruel Lord, she is drawn into political intrigue in the human and Fae worlds.

Swashbuckling, romantic, and full of the sights and sounds of Shakespeare’s London, this series starter delivers an unforgettable story—and a heroine unlike any other.

“Full of nimble prose and wit as sharp as the blades on its pages, this book is nothing short of a spectacular debut . . . I know that this is going to be a groundbreaking addition to the fantasy genre.”
Ayana Gray, New York Times-bestselling author Beasts of Prey —

“Every sentence of That Self-Same Metal will thunder through your bones. Rich in place and time, with a steely protagonist at its center, I felt like I'd been spirited to another land and time.”
Roshani Chokshi, New York Times bestselling author of The Gilded Wolves and Aru Shah —

"Williams’ debut is an absolute feast of imagination. Complex, brooding, impossible to put down."
Scott Reintgen, bestselling author of A Door in the Dark —

"Seamlessly weaves together history, fantasy, culture, magic, and love . . . I couldn't stop reading it, and when I finished all I wanted was more. Joan Sands may be a hero in another era, but also she's the one we urgently need in books right now."
Daniel José Older, New York Times bestselling author of Shadowshaper and Ballad & Dagger —

Brittany N. Williams is an actress, writer, Co-Artistic Director of The NOLA Project, and nerd of many fandoms. She’s performed across three continents—including a year spent as a principal vocalist at Hong Kong Disneyland—and her writing has been featured on BlackNerdProblems.com, Tor.com, in The Indypendent, The Gambit, Fireside Magazine, and in the Star Wars anthology From a Certain Point of View: The Empire Strikes Back. You can find her on Twitter and Instagram at @BrittanyActs and at brittanynwilliams.com. Williams lives in New Orleans.