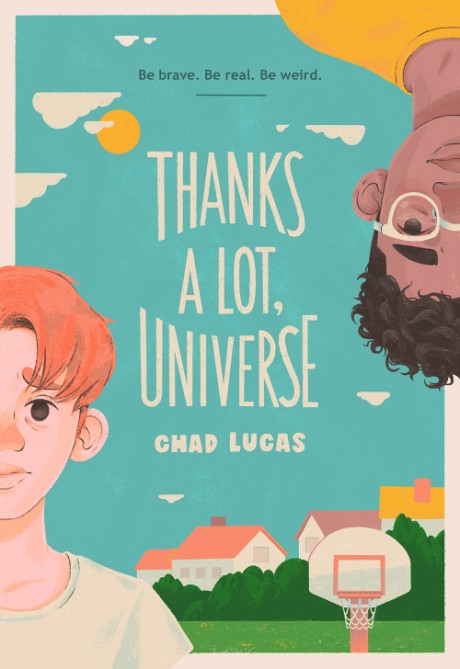 Thanks a Lot, Universe

Now in paperback, a moving contemporary middle-grade novel for anyone who’s ever felt like they don’t belong

Brian has always been anxious, whether at home, or in class, or on the basketball court. His dad tries to get him to stand up for himself and his mom helps as much as she can. But after he and his brother are placed in foster care, Brian starts having panic attacks. And he doesn’t quite know if there's something wrong with him . . .

Ezra’s always been popular. He’s friends with most of the kids on his basketball team—even Brian, who doesn’t talk to many people. But now, some of his friends have been acting differently, and Brian seems to be pulling away. Ezra wants to help, but he worries if he’s too nice to Brian, his friends will realize that he has a crush on him . . .

But when Brian and his brother run away, Ezra has no choice but to take the leap and reach out to Brian. And Brian realizes that he could really use a friend right now. As the two get closer, they’ll have to decide if they’re willing to risk being vulnerable with each other and share parts of themselves they’d rather hide from the world. But if they can be brave, they might just find the best in themselves—and each other. With a lively voice and moving story, Thanks a Lot, Universe is about finding your community and learning to trust your heart.

"A glorious ode to the beauty of pre-teen friendship and the beginnings of blurred lines and vital questions of identity. By far my favorite middle grade novel of 2021!"
Nic Stone, New York Times bestselling author of Clean Getaway —

“Thanks a Lot, Universe  demonstrates how you don't always know what your peers are going through, and how powerful kindness is. This honest portrayal of family trauma, changing friendships, and big emotions tugged at my heartstrings. Brian and Ezra will stick with me for a long time!”
Janae Marks, author of From The Desk of Zoe Washington —

“I loved this book. It's raw and heartfelt and debut author Chad Lucas has a gift for detail: the way a shirt scrunches up beneath the arms, the dialogue that would fit right into any middle school school hallway, the really poignant descriptions of anxiety and panic attacks...there is a distinctive honesty to the writing. I found myself cheering for our protagonists almost immediately, and their voices drew me along through a story and a message that should be widely shared. This book is going to do a lot of good.”
Wesley King, Edgar-award winning author of OCDaniel —

"Lucas concludes with a welcome touch of realism."
Bulletin of the Center for Children's Books —

Chad Lucas talks about the inspiration for the book

Chad Lucas has been in love with words since he attempted his first novel on a typewriter in the sixth grade. He has worked as a newspaper reporter, communications advisor, freelance writer, part-time journalism instructor, and parenting columnist. A proud descendant of the historic African Nova Scotian community of Lucasville, he lives with his family near Halifax, Nova Scotia. He enjoys coaching basketball and is rarely far from a cup of tea.