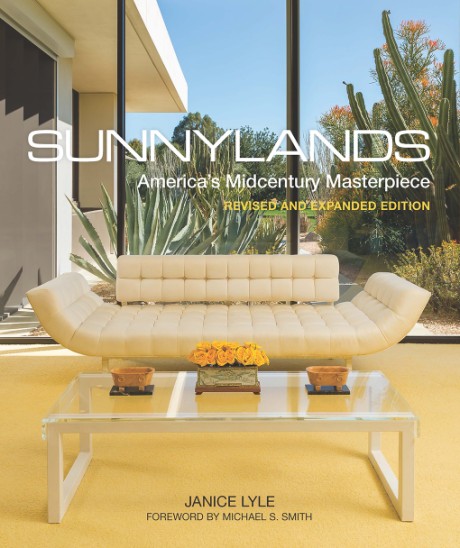 The definitive story of the most ambitious and glamorous midcentury-modern house in the United States—Sunnylands, the estate of Walter and Leonore Annenberg, in Rancho Mirage, California—now revised and expanded

In Palm Springs, the mecca of midcentury-modern architecture, Sunnylands is the undisputed masterpiece. With its pastel green and yellow interior and giddy pink roof, it was a Versailles for the Space Age. There is no other house like it anywhere: designed by one of California’s most important architects, A. Quincy Jones, it possesses the only completely preserved interior by Hollywood’s decorator-to-the-stars, William Haines. Completed in 1966, Sunnylands was built by media moguls Walter and Leonore Annenberg, and became a seat of power where presidents, movie stars, and corporate leaders. among them the Reagans, Queen Elizavetg II, Bob Hope, Truman Capote, Nelson Rockefeller, Oscar de la Renta, and more, met, relaxed, and ran the world—with nobody watching. To mark the 10th anniversary of the opening of Sunnylands to the public, this revised edition adds 32 pages of new photography of the now-mature 15 acres of contemplative gardens by Jim Burnett; a new LEED Platinum building by o2 Architecture of Palm Springs with 17 acres of breathtaking net-zero-water-use landscaping, not open to the public and only accessible here; and art installations created for the world-renowned Desert X festival. Lavishly illustrated, this book is a must-have for fans of midcentury design.

Janice Lyle, director of Sunnylands Center & Gardens, has been at the estate since 2008, when Leonore Annenberg was still alive. Her knowledge of the house and access to Annenberg family archives is unparalleled. Former executive director of the Palm Springs Art Museum, Lyle has lectured extensively on modern architecture and lived in one of Palm Springs’s most famous midcentury houses, Frey II. Interior designer Michael S. Smith, who was responsible for the 2010 makeover of the Oval Office, designed the interiors of the Sunnylands Visitors Center, emulating the aesthetic of the historic house. He lives in Santa Monica and Rancho Mirage. Interiors photographer Mark Davidson has shot assignments for Smithsonian, the Getty Museum, and The Hammer Museum. He lives in Palm Springs.