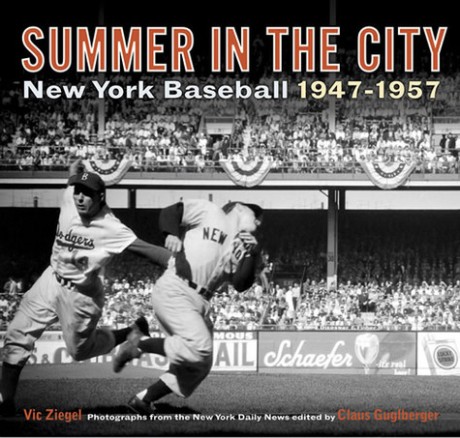 Summer in the City

Between 1947, when Jackie Robinson joined the Brooklyn Dodgers, and 1957, when the Dodgers and the New York Giants played their last season in the East, New York baseball teams appeared in ten World Series. In seven of those years, either the Giants or the Dodgers vied for the championship with the lordly Yankees. These were truly the glory years of New York baseball, when the city breathlessly followed the game in the tabloids rather than on the tube. And the New York Daily News, the nation's largest newspaper, had the best photographers, the best equipment, and the best field position to record the action, bringing the art of baseball photography to its highest pitch.

Accompanied by an evocative text by veteran sportswriter Vic Ziegel, the dramatic photographs (complete with their colorful original captions)-featuring such superstars as Robinson, Joe DiMaggio, Yogi Berra, Roy Campanella, Mickey Mantle, and Willie Mays-allow the reader to follow year by year the course of baseball's most exciting decade in the world's greatest city.

Vic Ziegel was a baseball beat writer at the New York Post for six years and has written sports columns for the New York Daily News, Rolling Stone, Inside Sports, and New York magazine. He has won two Red Smith writing awards and the Nat Fleischer Lifetime Achievement Award. He lives in New Rochelle, New York.

Claus Guglberger is a photo editor who has been working with the Daily News photo archive for the past seven years.