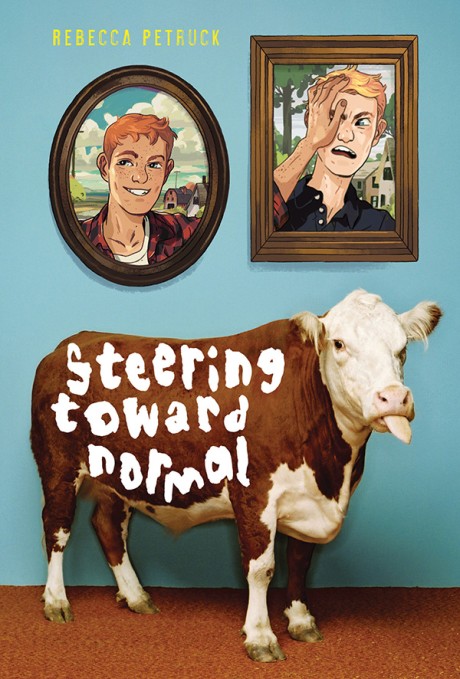 Eighth grade is set to be a good year for Diggy Lawson: He’s chosen a great calf to compete at the Minnesota State Fair, he’ll see a lot of July, the girl he secretly likes at 4-H, and he and his dad Pop have big plans for April Fool’s Day. But everything changes when classmate Wayne Graf’s mother dies, which brings to light the secret that Pop is Wayne’s father, too. Suddenly, Diggy has a half brother, who moves in and messes up his life. Wayne threatens Diggy’s chances at the State Fair, horns in on his girl, and rattles his easy relationship with Pop.
What started out great quickly turns into the worst year ever, filled with jealousy, fighting, and several incidents involving cow poop. But as the boys care for their steers, pull pranks, and watch too many B movies, they learn what it means to be brothers and change their concept of family as they slowly steer toward a new kind of normal.

Praise for Steering Toward Normal
"First-time author Petruck’s account of country life is never dull as she depicts the strong work ethic of cattlemen and women, along with the universal conflicts between siblings."
--Publishers Weekly

"The plot is full of pranks and humorous situations but at its heart, it is a story about navigating the complicated and sometimes unexpected dynamics that come with being part of a family. Petruck captures the setting of rural Minnesota well, creating a small town where it seems like nearly everyone is related or at the very least always knows everyone else’s business."
--VOYA Magazine

"In Petruck’s capable hands, raising a steer—caring for it, loving it, and eventually letting it go—becomes a keen metaphor for the loss of a loved one. Diggy is a perceptive narrator, but not unusually so for his age, and it’s reassuring to see him sort out his tangled feelings."
--Booklist

STARRED REVIEW
"Petruck expertly manifests the gruff ways that teenage guys—especially brothers—express vulnerability coated with a veneer of hobbies and practical joking, and she slowly draws her characters together over steer grooming and model rockets...It’s the warm but difficult relationship between Diggy and Wayne that makes this one a purple ribbon."
The Bulletin of the Center for Children's Books —

Rebecca Petruck is a Minnesota girl, though she currently lives in North Carolina, where she earned her MFA in creative writing. A former member of 4-H, she was also a Girl Scout and competed in MATHCOUNTS. She may have pulled a few pranks in her life, though no one can prove she wrapped that entire car in cellophane. This is Rebecca’s first novel.