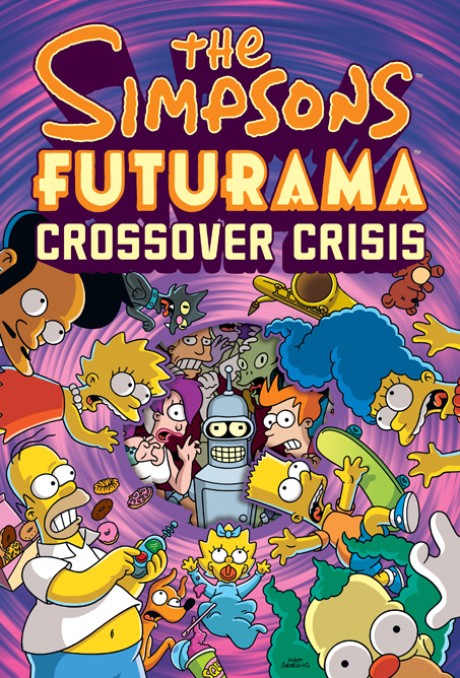 What would happen if the Planet Express crew and the citizens of New York City in the 31st Century met the Simpsons and the citizens of Springfield . . . and how is it even possible? Prepare yourself for a Simpsons saga filled with Futurama! A Futurama fable suffused with the Simpsons! Featuring a plethora of pleasing plot devices including: evil brain spawn, lactose-intolerant space aliens, a giant ball of yarn, flying cars, mistaken identities, world domination, the brittle fabric of reality torn asunder, a comic book-collecting sentient planet, the Dewey Decimal system, self-eating watermelons, slave labor, space pirates, power-crazed vampires, super hero battles, unflattering underwear, mad science run amok, and much, much more!

This is the epic story that you've been waiting for . . . a story so big, so ambitious, so sweeping that it can only be told in a 208-page, large format, slip-cased edition, complete with new material, supplemental stories, preliminary sketches, character designs, and a pin-up gallery featuring the talents of comics industry luminaries Alex Ross, Sergio Aragonés, Geof Darrow, Kyle Baker, Peter Kuper, and Bernie Wrightson, among others.

It's a comic convergence on a reality ripping, time altering, space traveling, intergalactic scale! It's The Simpsons Futurama Crossover CrisisUncut and all comedy! First published in 2002 and 2005 as two two-part, comic book mini-series (Futurama/Simpsons Infinitely Secret Crossover Crisis and The Simpsons/Futurama Crossover Crisis II), these four hard-to-find comics are collected together for the first time in a hardcover collection, encased in a die-cut slipcase, and packaged with a reprint of the very first Eisner Award-winning issue of Simpsons Comics from 1993.

“Abrams’ initial release is a beautifully designed package, a glossy hardcover in a glossier slipcover, as bright and colorful as a grab-bag bin in a candy-store.”
—The Onion AV Club

From Publishers Weekly
Two classic animated series are brought together in a comic that offers many surprises, including how well it all works when transported to a new medium. Although both sources are the creation of cartoonist Matt Groening, the broadcast runs of each series referred to the other as works of fiction within their own universes, perhaps seeking to avoid the temptation of an attention grabbing crossover. And yet somehow this assemblage ably accomplishes just such a task while remaining faithful to the source materials. When Futurama's crew from the Planet Express delivery service become trapped in the fictional world of a Simpsons comic book, they must escape from Springfield. But shortly afterward they open a rift that brings the Simpsons characters into the Planet Express world, where the fictional characters must be rescued and returned to the pages of their comic book. Boothby's writing excels at letting each universe and the characters in them maintain their subtly distinct identities even when they blend. The overarching story for the book is designed to easily allow opportunities for affectionate references to comics, to science fiction, and to notable works of fiction. While the Simpsons comics included in the collection are not as strong, the crossover story takes what could have been a simple throwaway gag and instead crafts a funny, intricately detailed story. (Apr.)

Matt Groening is the creator and executive producer of the Emmy Award-winning series The Simpsons, as well as the creator of the animated television series Futurama. In addition to producing a weekly cartoon strip, “Life In Hell,” and supervising the ongoing production of the two weekly television series, Groening oversees all aspects of the licensing and merchandising of The Simpsons. Groening lives in Los Angeles, CA.

Bill Morrison is a comic book artist and writer and a co-founder of Bongo Comics. Morrison currently serves as editor and creative director. He lives in Simi Valley, CA.