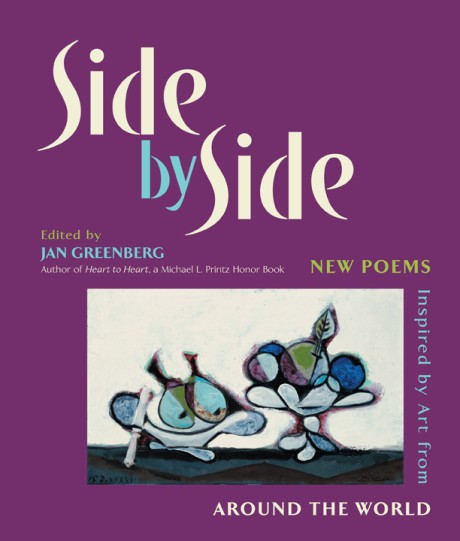 New Poems Inspired by Art from Around the World

From the winner of the Michael L. Printz Honor Award comes a poetry anthology inspired by poets and artists from around the globe.

In the groundbreaking tradition of Heart to Heart, this collection examines the connections between an artist's work and a poet's response, putting the artist and poet literally on the same page. With an English translation accompanying each poem in its original language, this is a novel, illuminating way to discover poetry and art together. The poems, most published or translated for the first time in the United States, are surprising and engaging, helping us see art from a fresh perspective.

Hailing from thirty-three countries on six continents, the artists and poets included in this collection represent a sampling of the world's diverse art history, from an ancient Egyptian mummy case to a huge contemporary artwork that takes over an entire museum in Sweden. But they also emphasize the universal appeal of art and poetry. In this kaleidoscope of voices and visions, seeing a painting through another person's eyes and understanding a stranger's point of view, shows how similar we all are.

BOOKLIST STARRED: Following a similar format to her 2002 Printz Honor Book, Heart to Heart, Greenberg offers another anthology of accomplished poems inspired by artworks. In this volume, Greenberg extends the book's geographical reach beyond the U.S., bringing together the work of poets and artists from around the globe. As in her Heart to Heart, the poems are grouped loosely into categories, defined in Greenberg's inspirational introduction. Some tell stories; some speak in the voice of an object in the artwork; some explore the interaction between a viewer and an art object; and some focus on the elements of an artwork's composition. Each spread features a poem in its original language, the English translation, and an artwork, usually from the same country or culture as the poem. With few exceptions, the reproductions of the art, which ranges from ancient to contemporary work, are sharp and clear, and the moving, often startling poems invite readers to savor the words and then look closely art each image. Teen will easily connect with the poems' universal themes, including identity, childhood memories, nature's mysterious power, and the powerful emotions and experiences that link us all. Biographical information about both poets and the artists concludes this welcome title, which makes a natural partner to Naomi Shihab Nye's This Same Sky (1992). –Booklist, starred review

Children's Literature--A great introduction to the study of cultural arts is through ekphrasis: poetry inspired by art. This is a terrific way to expose anyone to multiple foreign languages and different types of artifacts. Thirty-three countries are represented from six continents to bring together an extraordinary variety of art and poetry. Poems are shown in their native language—and how often does anyone get to compare written Swedish to Navajo? There is also an astounding assortment of art, from classic paintings such as Botticelli's Portrait of a Young Man, and Matisse's Woman in Blue, to Mexican Musicians, made of ceramic and painted wooden figurines, and a mixed media piece entitled The Malmo Experience by Ernesto Neto. The book has four sections determined by the contents of each poem: "Stories," "Voices," "Expressions," and "Impressions." "Stories" includes poems that tell a story about what is occurring in the art. "Voices" narrates the poem from the subject's point of view. "Expressions" is the bond between the viewer and the art, and "Impressions" is the poet's description of the art. The layout of every page displays both poems and its matching artwork for the best and easiest way to comprehend all pieces as one. There are even biographies of the artists, poets, and translators, as well as a labeled world map to further appreciate the work and diversity that made this book. Reviewer: Renee Farrah

Alan Review--In her previous anthology, Heart to Heart, Jan Greenberg collected American poems inspired by works of art. Side by Side continues this tradition from a global perspective. Works of art are reprinted and paired with poetry inspired by the art. The poems are printed both in their original language and in English translation. The poetry and art collected are grouped into chapters: Stories, Voices, Expressions, and Impressions. Additionally, the book contains brief biographies of the artists, authors, and translators, as well as a map of the world identifying the countries reflected in the collection Side by Side is an excellent addition to any classroom or library. It is useful first as a book of fine poetry but also as a supplement to multicultural studies and as a model for the use of art as a prompt for writing. Reviewer: F. Todd Goodson

School Library Journal--Gr 6 Up- Continuing in the vein of Heart to Heart (Abrams, 2001), Greenberg invited poets from around the world to identify a work of art and create a poem about it. In doing so, she not only gathered poetry and art, but also connects readers to global cultures and traditions. Many of the selections were written in languages other than English, and the original and translated poems share center stage, side by side, with the artwork that inspired the verse. This stellar anthology is arranged in four categories. In "Stories," the poet looks at art and imagines a story. In "Voices," the poet speaks as a subject depicted in the poem; "Expressions" explores the process of looking at, asking questions, and interpreting the art, and in "Impressions," the poet describes the artwork and elements of the composition. The careful arrangement seamlessly draws readers' focus to the themes of art and literature, as in Günter Kunert's poem "Der Schre i/The Scream" (translated by Gerald Chapple) about Edvard Munch's painting. Poets and artists who are familiar to Western readers, such as Pat Mora, Henri Matisse, and Pablo Picasso, appear side by side with poets and artists who are less widely recognized. The book includes biographies of all the poets, translators, and artists and a world map that identifies each contributor's native country. This sophisticated book is ideal for literature, art, and foreign-language curricula. It creates cultural bridges and celebrates the genius of inspired translation.-Shawn Brommer, South Central Library System, Madison, WI