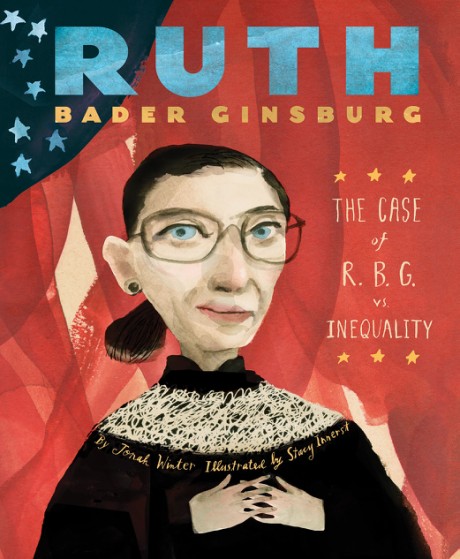 The Case of R.B.G. vs. Inequality

To become the first female Jewish Supreme Court Justice, the unsinkable Ruth Bader Ginsburg had to overcome countless injustices. Growing up in Brooklyn in the 1930s and ’40s, Ginsburg was discouraged from working by her father, who thought a woman’s place was in the home. Regardless, she went to Cornell University, where men outnumbered women four to one. There, she met her husband, Martin Ginsburg, and found her calling as a lawyer. Despite discrimination against Jews, females, and working mothers, Ginsburg went on to become Columbia Law School’s first tenured female professor, a judge for the US Court of Appeals, and finally, a Supreme Court Justice.

Structured as a court case in which the reader is presented with evidence of the injustice that Ginsburg faced, Ruth Bader Ginsburg is the true story of how one of America’s most “notorious” women bravely persevered to become the remarkable symbol of justice she is today.

**STARRED REVIEW**
"Innerst’s digital gouache-and-ink illustrations are as matter-of-fact as the text, clearly offering up facts that showcase what Ruth faced throughout her life. A smart, sometimes biting biography that proves it’s never too early to start teaching kids about justice."
Booklist —

**STARRED REVIEW**
"The text, informative without overwhelming, is extended by an author's note describing some of Ginsburg's actual court cases...From cover to cover, a lovingly made volume that succeeds on every level. A beautiful example of what a picture book can be."
Kirkus Reviews —

**STARRED REVIEW**
"A valuable and moving account of a woman who...has herself become a symbol of justice in America."
Publishers Weekly —

Jonah Winter is the author of more than 30 nonfiction picture books, including Barack and Sonia Sotomayor. He divides his time between Santa Fe and a small town in Pennsylvania.

Stacy Innerst is an illustrator who’s received many awards for his work. He lives in Pittsburgh.