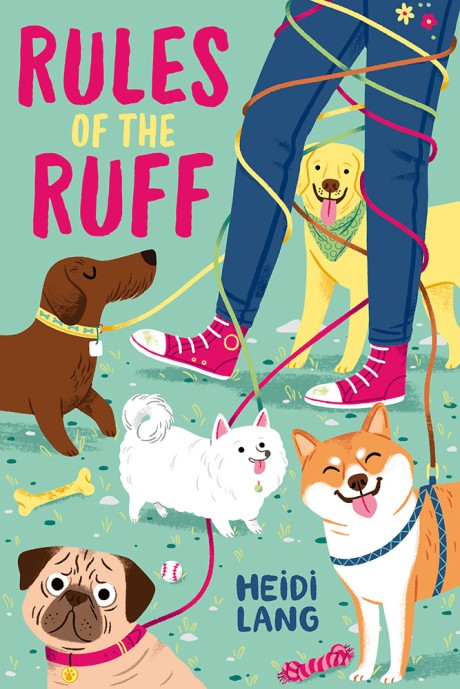 Rules of the Ruff

Twelve-year-old Jessie is in for a long summer at her aunt and uncle’s house. Her cousin Ann has a snotty new best friend, which leaves Jessie all alone. But Jessie is industrious, and—not content with being ignored all summer—she convinces Wes, a grouchy neighborhood dog walker, to take her on as his apprentice.
Sure, dog walking turns out to be harder than she expected, but she has Wes’s dog-walking code, the Rules of the Ruff, to guide her, and soon she’s wrangling her very own pack. But when a charismatic rival dog walker moves to town, she quickly snatches up most of Wes’s business—and Jessie decides she isn’t going to take this defeat with her tail between her legs.

"Featuring a small cast with distinctive personalities and voices . . . Give this to dog lovers or readers seeking a light and breezy summer read."
School Library Journal —

"Lang’s approach to sharing this tale of friendship and family leads readers to understand how much dogs can teach humans about their own relationships. Dog-lovers will laugh, cry, and cheer for Jessie, Wes, and their pack of pups in this fun read."
Booklist —

Learn the Rules of the Ruff

Heidi Lang is the coauthor of A Dash of Dragon and A Hint of Hydra as well as a former professional dog walker. She lives in Richland, Washington.