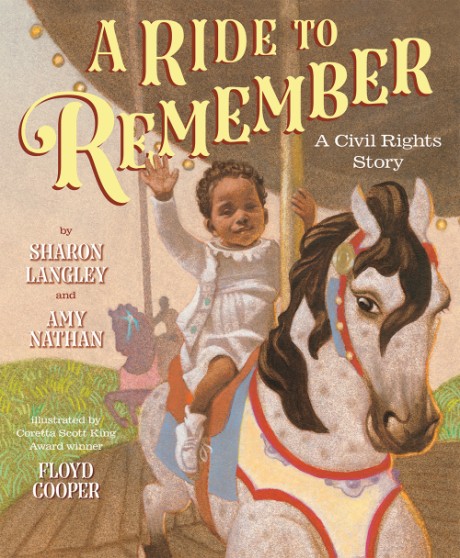 A Ride to Remember tells how a community came together—both black and white—to make a change. When Sharon Langley was born in the early 1960s, many amusement parks were segregated, and African-American families were not allowed entry. This book reveals how in the summer of 1963, due to demonstrations and public protests, the Gwynn Oak Amusement Park in Maryland became desegregated and opened to all for the first time. Co-author Sharon Langley was the first African-American child to ride the carousel. This was on the same day of Martin Luther King Jr.’s March on Washington for Jobs and Freedom. Langley’s ride to remember demonstrated the possibilities of King’s dream. This book includes photos of Sharon on the carousel, authors’ notes, a timeline, and a bibliography.

"A solid addition to U.S. history collections for its subject matter and its first-person historical narrative."
— School Library Journal

Sharon Langley became known around the country in 1963 as the first African-American to ride the carousel at Gwynn Oak Amusement Park. She lives in Los Angeles. Amy Nathan is an award-winning author. Her awards and honors include a Clarion Award and a Washington Post Book of the Week. She lives in Westchester County, New York. Floyd Cooper has won the Coretta Scott King Award and Honor multiple times. He was twice nominated for the NAACP Image Award and has received numerous other awards including the Bank Street College Book of the Year Honor. He lives in Easton, Pennsylvania.