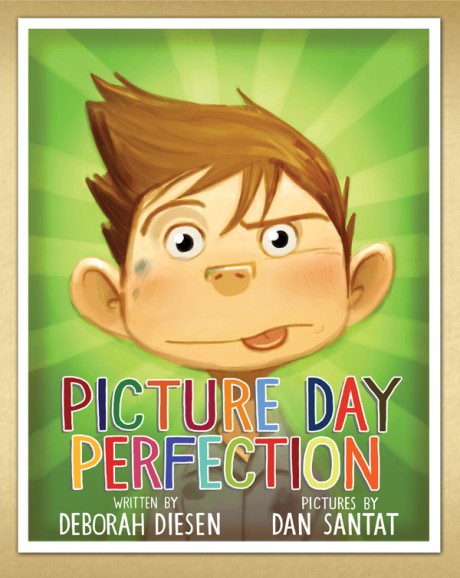 It's picture day, and the boy at the center of this charming picture book wants to make sure his picture is perfect. It seems as though everything's going wrong for him—he has bedhead, a stained shirt, and a big scowl on his face. But when he goes up for his picture, he thinks about his terrible appearance, and he smiles—because he secretly wants his picture to be the worst ever taken! But just as he smiles, the photo is snapped and his plan is ruined—the photo looks great.
Perfectly paired with the larger-than-life silliness of Dan Santat's illustrations, this is sure to be a schoolroom favorite. It will come bound with a picture frame in the back so readers can add their own class photos to the book.
Â
Praise for Picture Day Perfection
"A clever tale about a kid who wants this year to be his showcase for the perfect school picture."
--Kirkus Reviews
Â
"Colorful yearbook-style endpapers are fun to pore over and even include a place to insert one's own picture, though this feature will be compromised by most library processing. This slapstick picture book will appeal most to school-age kids who will get the jokes peppered throughout the text and the visuals."
--School Library Journal

"The narrator's malleable features are in a perpetual state of contortion as he plans his photo disaster and reacts to the series of unfortunate events that conspire to bring him glory. Clever bits such as the scribbled emoticons on his September calendar page, and the sepia- and gray-toned faces that play in his imagination add to the fun."
--The Bulletin of The Center for Children's Books

Deborah Diesen is the author of The Pout-Pout Fish, a New York Times bestseller and one of TIME’s top 10 children’s books of 2008. She lives in Michigan. Dan Santat is the illustrator of many books for children, including Kel Gilligan’s Daredevil Stunt Show. He lives in California.