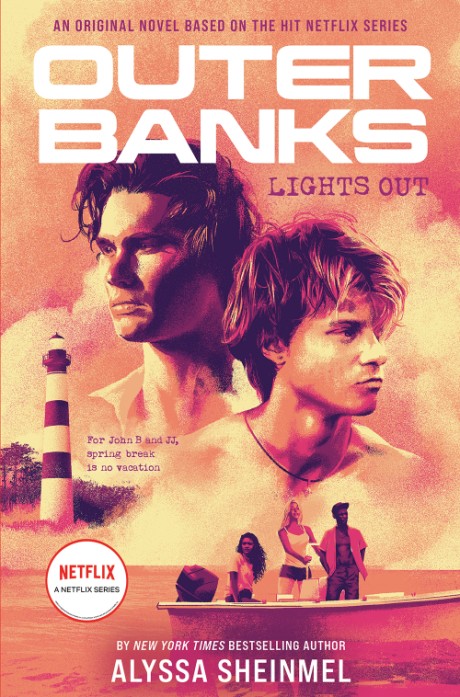 An original YA novel based on the hit Netflix series, Outer Banks, written by New York Times bestselling author Alyssa Sheinmel, featuring JJ and John B in a brand-new, high-octane adventure

It’s spring break in the Outer Banks, and the islands are swarming with rich tourists. The last thing JJ and John B want to do is spend their week watching Kooks in action, so they plan a fishing getaway to the notoriously dangerous Frying Pan Shoals—nicknamed “Graveyard of the Atlantic” for good reason.

Turns out they aren’t the only adventure-seekers at sea. Soon after they set sail, the friends run into the captivating Savannah, who hitches a ride aboard the HMS Pogue when the weather worsens and her boyfriend leaves her stranded. As a violent storm sets in, the three realize the only place to safely ride out the squall is a creepy, abandoned hotel on the shoals’ lighthouse platform. Or is it abandoned? It doesn’t take long for the three teens to realize they may not be alone. . . .

Further complicating the life-or-death adventure is a mounting attraction between JJ and the secretive Savannah—the closer JJ gets to her, the more he realizes he’s playing with fire. Even if they get out of the shoals alive, can a Pogue–Kook romance survive the high-stakes shores of the Outer Banks?

"This plot-driven book serves as a fun companion to Outer Banks and will appeal to fans of the show. . .an enjoyable, quick read."
Kirkus Reviews —

Alyssa Sheinmel is the New York Times bestselling author of several novels for young adults, including The Castle School (for Troubled Girls),What Kind of Girl, A Danger to Herself and Others, and Faceless. Alyssa is the co-author of The Haunting of Sunshine Girl. Alyssa grew up in Northern California and New York, and attended Barnard College. She currently lives and writes in New York.