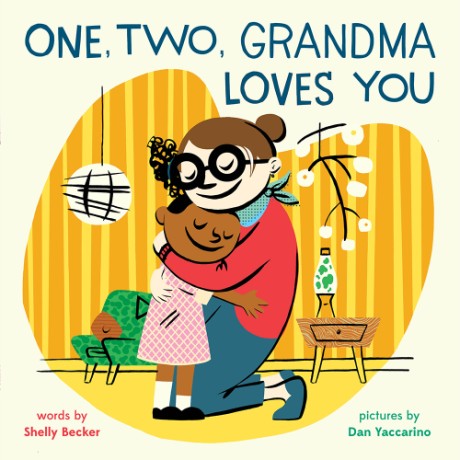 One, Two, Grandma Loves You

A young girl and her grandmother count up to their next visit and then do all of their favorite things together in this joyful rhyming picture book.

**STARRED REVIEW**
"Why does it ever have to end? The details in the illustrations will have children poring over the pages, where the clues to good times past and present add up to a generous look at the special bonds of an extended family."
School Library Journal —

"Becker and Yaccarino show how Grandma and grandchild keep in touch while apart, and then a culminating scene shows them reuniting for another visit... There’s lots to love here indeed."
Kirkus Reviews —

Shelly Becker is the author of Even Superheroes Make Mistakes, Even Superheroes Have Bad Days (a 2018 Blue Spruce Award Nominee that Kirkus Reviews called “an action-packed romp”), and Mine! Mine! Mine!, which has been included on many Top Five and Top Ten lists of books that teach the concept of sharing. Becker lives in Toronto, Canada, far away from her three wonderful grandchildren, who live in New Jersey. When they can’t be together in person, they keep in touch by speaking on the phone and sending plenty of pictures and videos. Visit her online at shellybeckerbooks.com. Dan Yaccarino is the internationally acclaimed author and illustrator of more than 50 books for children, most notably Doug Unplugged, Unlovable, The Fantastic Undersea Life of Jacques Cousteau, and Every Friday. Yaccarino’s work in children’s literature has garnered a host of prestigious awards, as well as adaptations into foreign editions, stage productions, and toys. Yaccarino created and produced the animated series Doug Unplugs, Oswald, and Willa’s Wild Life. He is also the designer behind the animated series The Backyardigans. Yaccarino's work has been recognized by a host of prestigious awards, including the Bologna Ragazzi, the New York Times 10 Best Illustrated, ALA Notable, and the Parent’s Choice Award. More than 2.5 million of his books have been sold to date. Visit him online at Yaccarinostudio.com.