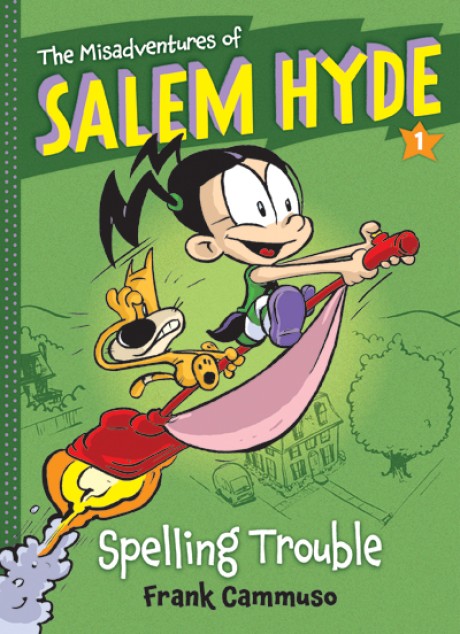 The Misadventures of Salem Hyde

Salem Hyde just isn't like other kids. For one thing, she's stubborn, independent, and impulsive. For another, she's a witch. Salem acts first and thinks later—which means most of her thinking involves coming up with excuses!
Good thing she's been assigned an animal companion, Lord Percival J. Whamsford III. This over-anxious cat doesn't like Salem calling him "Whammy," and Salem doesn't like listening to his long-winded explanations as to why she shouldn't do something . . . like enter the class spelling bee.
Salem knows she can beat all her classmates at spells, no problem. Too late, she realizes the competition is about spelling words, not magic. And there's nothing like a misspelled spell to cause all kinds of havoc!

Praise for The Misadventures of Salem Hyde: Book One
STARRED REVIEWS
"A fledgling witch receives necessary guidance from a talking cat in this utterly adorable page-turner… A delightful buddy story and an auspicious series opener; be sure to make room on shelves for Salem and Whammy."
—Kirkus Reviews, starred review

"Cammuso evokes both the sarcastic spunk and gentle warmth of Calvin and Hobbes in this humorous tale of unlikely pals."
—The Bulletin of The Center for Children's Books

"Ironic, dead-pan, and slapstick humor balance the warm sincerity and vulnerability of the characters in this brilliant debut volume of this easy-reader series in comic book format."
Language Arts —

Frank Cammuso is an Eisner-nominated cartoonist, the creator of the popular middle school graphic novel series Knights of the Lunch Table, and the illustrator of several beginning reader graphic books, including Otto’s Orange Day. He lives in Syracuse, New York.