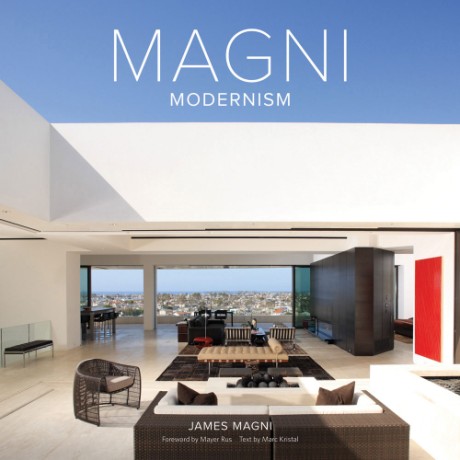 James Magni’s highly sophisticated, modern home design is highly sought after the world over and showcased here for the first time. Magni Modernism displays the designer’s sensibilities through 14 private residences found in such diverse locales as Beverly Hills, Mexico City, Jackson Hole, Aspen, and Moscow. With elegant restraint, Magni’s interiors complement the architecture of these magnificent homes, reflecting his training as an architect and spotlighting the buildings’ dramatic lines, open spaces, and spectacular views. From the limestone walls of a penthouse in Mexico City to the dark wood and concrete of a home in the mountains of Jackson Hole, each residence is beautifully captured in photographs and accompanied by an insightful and engaging text by design writer Marc Kristal.

Originally trained as an architect, James Magni found his calling in residential interior design. He established Magni Design, Inc., in 1988 and launched Magni Home Collection, his furniture design studio, in 1996. Magni has been named to Architectural Digest’s prestigious Top 100 Designers list, and his work has appeared in the New York Times, the Los Angeles Times, Architectural Digest, Veranda, Robb Report, and numerous other publications. While his frequent travels to international cities and remote locales continually provide inspiration for his designs, Magni lives and works in Los Angeles.

Architecture and design writer Marc Kristal has written, co-authored, or contributed to a dozen books, notably Re:Crafted: Interpretations of Craft in Contemporary Design and Interiors and Immaterial World: Transparency in Architecture. As a journalist, Kristal has written for the New York Times, Architectural Digest, Elle Decor, Wallpaper, Interior Design, and Metropolis, among other publications, and was a contributing editor of Dwell. He lives in New York.

Design critic and author Mayer Rus is the West Coast editor of Architectural Digest. Prior to moving to Los Angeles, he was design editor of Condé Nast’s House & Garden and editor-in-chief of Interior Design. He lives in Los Angeles, in Silver Lake, with his dog, Linus.