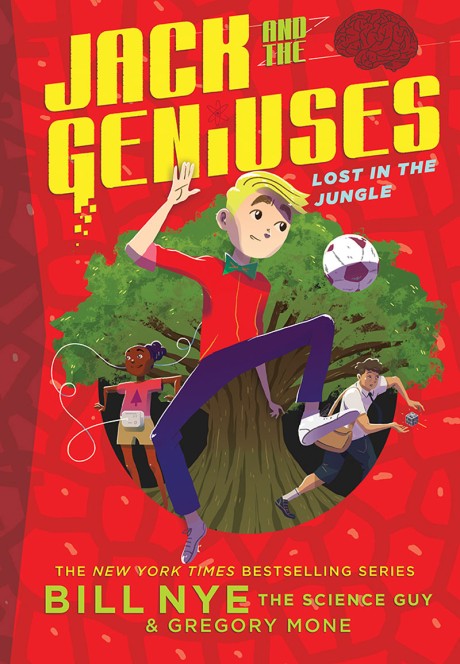 Lost in the Jungle

Jack and the Geniuses Book #3

An idea that could help bring internet access to remote parts of the world takes Jack and his genius siblings deep into the Amazon rainforest in the final thrill-packed adventure in the New York Times bestselling series from Bill Nye and Gregory Mone!

Dr. Hank Witherspoon has disappeared. When Jack and his genius siblings, Ava and Matt, find Hank’s lab ransacked, they uncover clues pointing them to Brazil—but many questions remain. Why was Hank studying dangerous electric eels? And who is trying to steal his inventions? Their investigation leads them to a soccer prodigy, his savvy sister, a business tycoon who zips around on motorized boots, and a strangely incompetent riverboat captain.

In the depths of the Amazon rain forest, the three siblings and their new friends must overcome deadly piranhas, stealthy jaguars, and the dreaded “Trail of Pain” to save Hank . . . and make it out alive.

In the Jack and the Geniuses series, readers join Jack, Ava and Matt on adventures around the world to tackle some of science's biggest challenges, including new ways to create clean drinking water, to generate clean and renewable energy, and to extend information access to the entire planet. Each book in the series includes cool facts about the real-life science found in the story and a fun DIY project.

Bill Nye is a science educator, mechanical engineer, television host, and New York Times bestselling author with a mission: to help foster a scientifically literate society. Gregory Mone is a novelist and science journalist who has written several books for children. He lives in Martha’s Vineyard, Massachusetts.