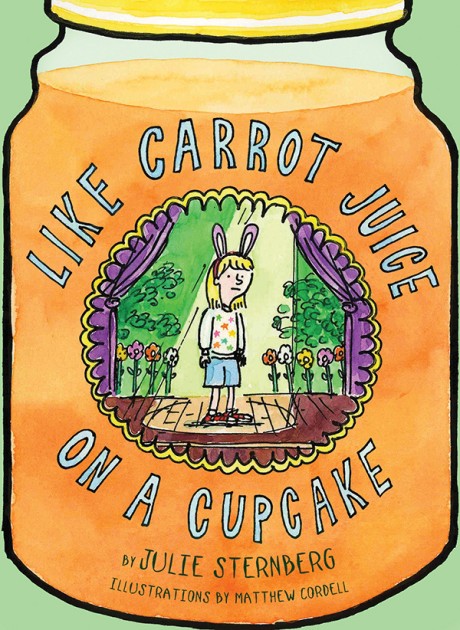 I did a mean thing.
A very mean thing.
I HATE that I did it.
But I did.
This is worse than
carrot juice on a cupcake
or a wasp on my pillow
or a dress that’s too tight at the neck.
In the third installment from the team who created Like Pickle Juice on a Cookie and Like Bug Juice on a Burger, Eleanor’s relationship with her best friend, Pearl, experiences its first growing pains. When a glamorous new student transfers to school, at first Eleanor’s excited about the possibility of a new friend. But when Pearl is assigned to be the new girl’s buddy, Eleanor fears she can’t compete. To make matters worse, Eleanor’s been chosen for the lead role in the springtime musical, which means she has to sing a solo in front of the entire school!
From overcoming stage fright to having a secret crush, young readers will relate to Eleanor as she navigates the bittersweet waters of growing up.

Praise for Like Carrot Juice on a Cupcake
STARRED REVIEW
"Sternberg again displays her talent at putting Eleanor on the horns of a common youthful dilemma in accessible prose."
--Bulletin of the Center for Children’s Books, starred review

"This is another very true-to-life story about the challenges of growing up. Julie Sternberg captures young emotions so perfectly!"
--School Library Monthly

"The measures Eleanor takes to right her wrongs and rise to challenges are beautifully revealed in Sternberg’s spare text, which leaves plenty of room for the reader to
empathize. Like Eleanor, this series continues to grow and blossom."
--Booklist

"The pen and ink drawings capture facial expressions and emotions quite well. A good addition for most early-chapter-book collections."
--School Library Journal

Julie Sternberg received her MFA in writing for children from the New School. She is the author of Like Pickle Juice on a Cookie and Like Bug Juice on a Burger. She lives in Brooklyn.

Matthew Cordell is the illustrator of Like Pickle Juice on a Cookie, Like Bug Juice on a Burger, Bat and Rat, and Trouble Gum. He lives outside Chicago.