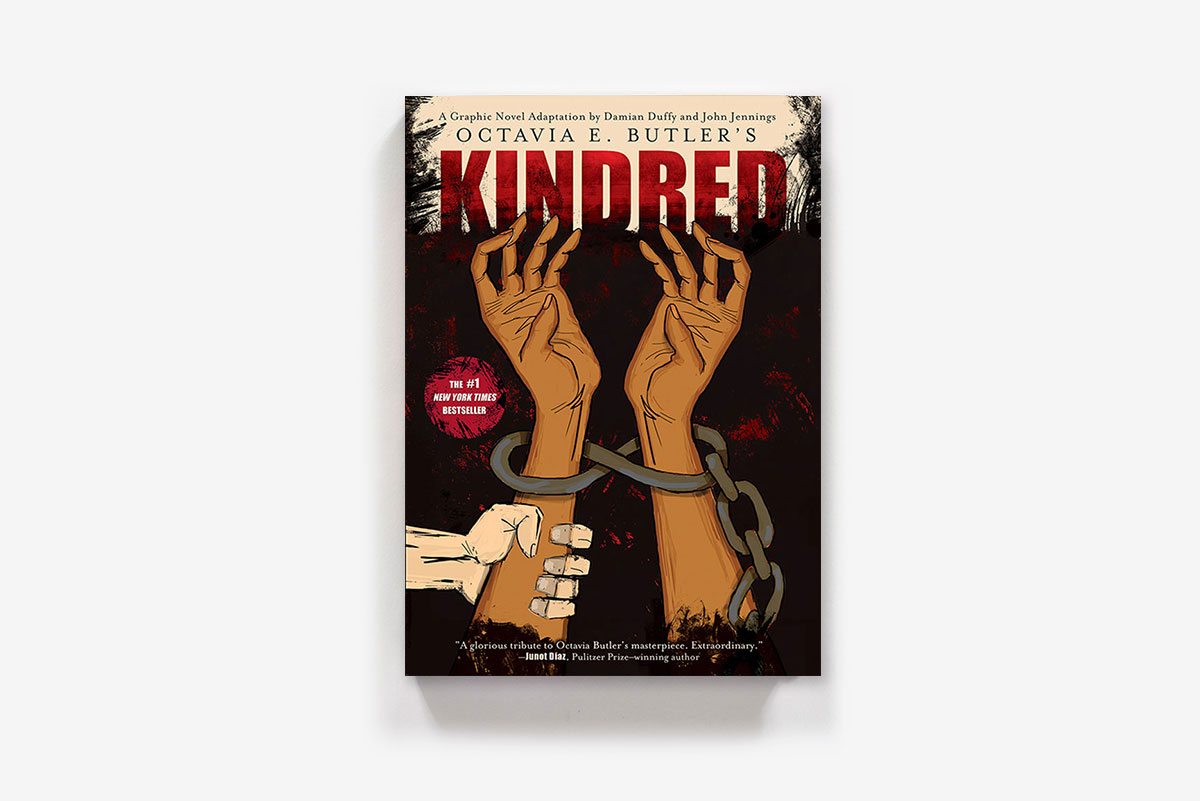 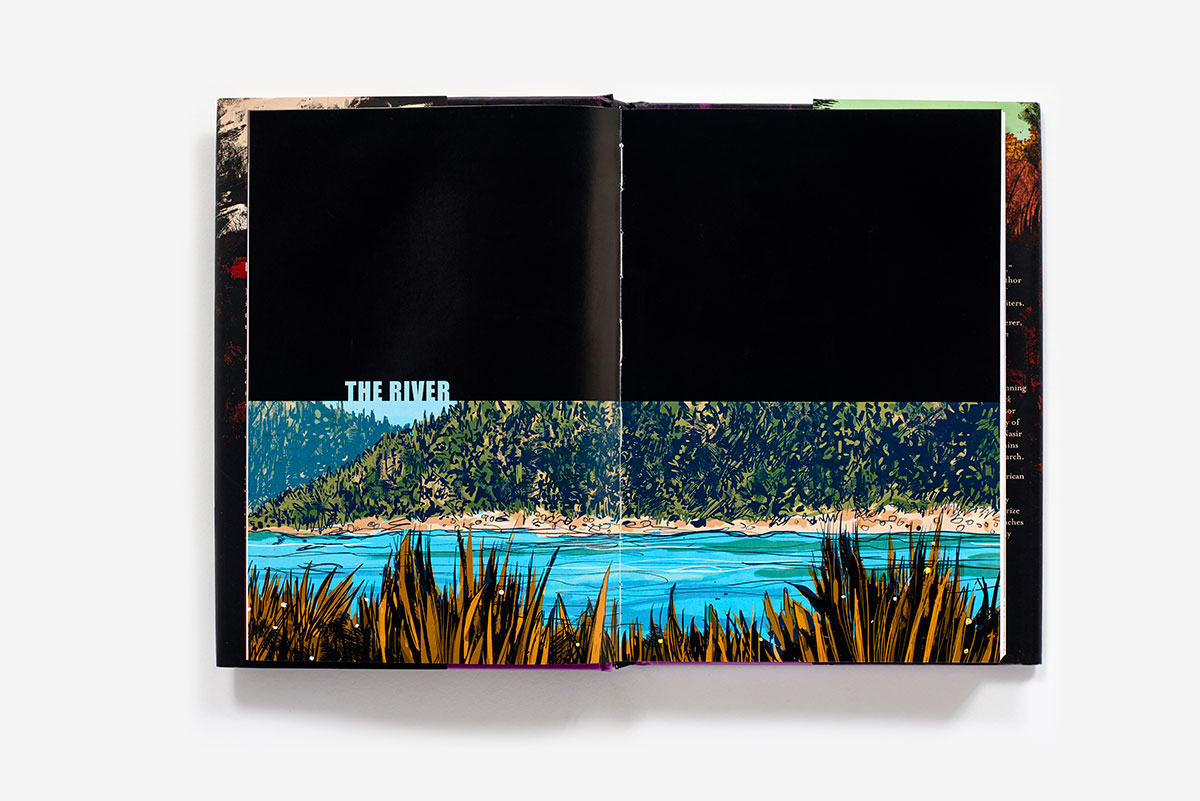 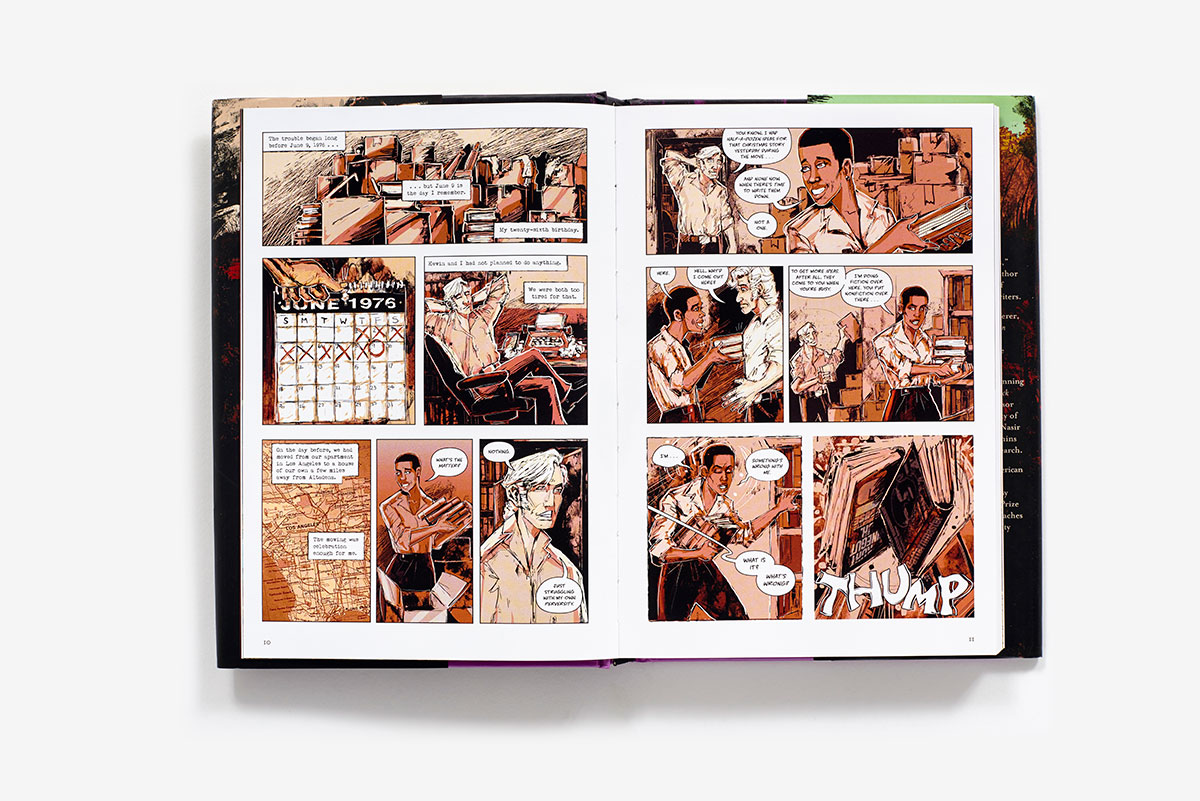 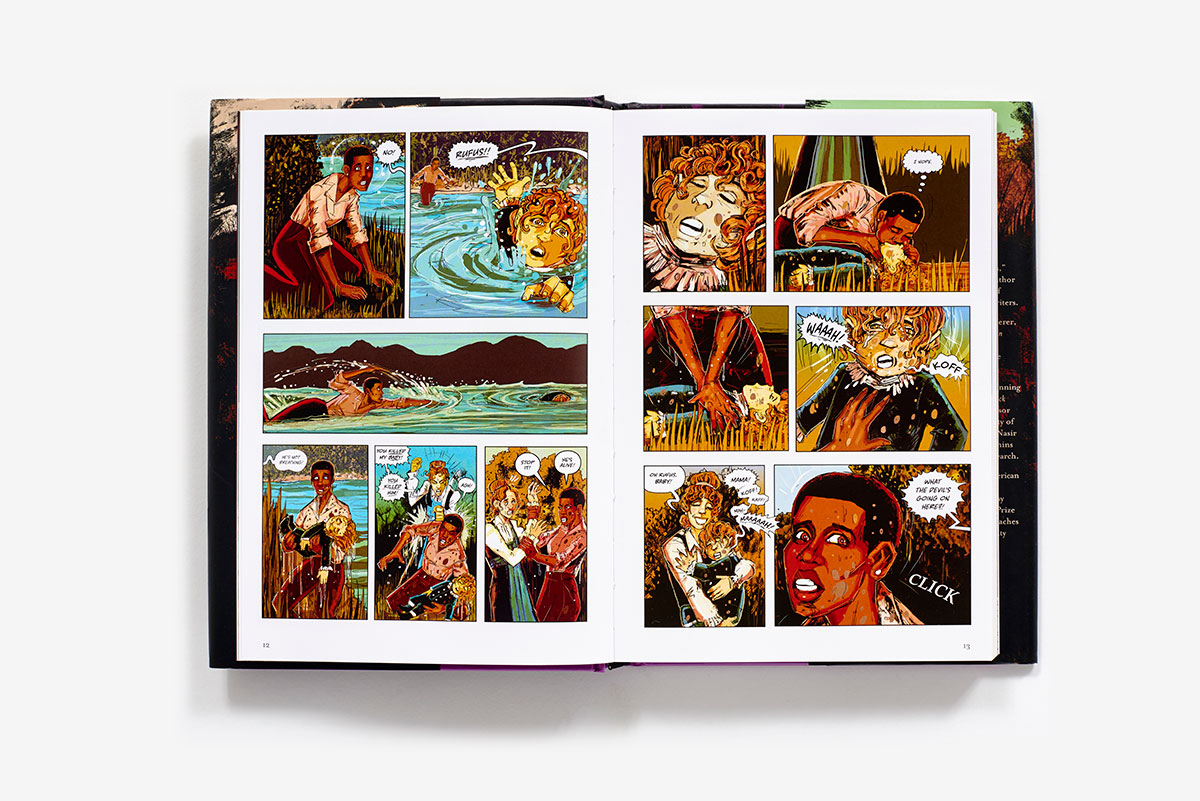 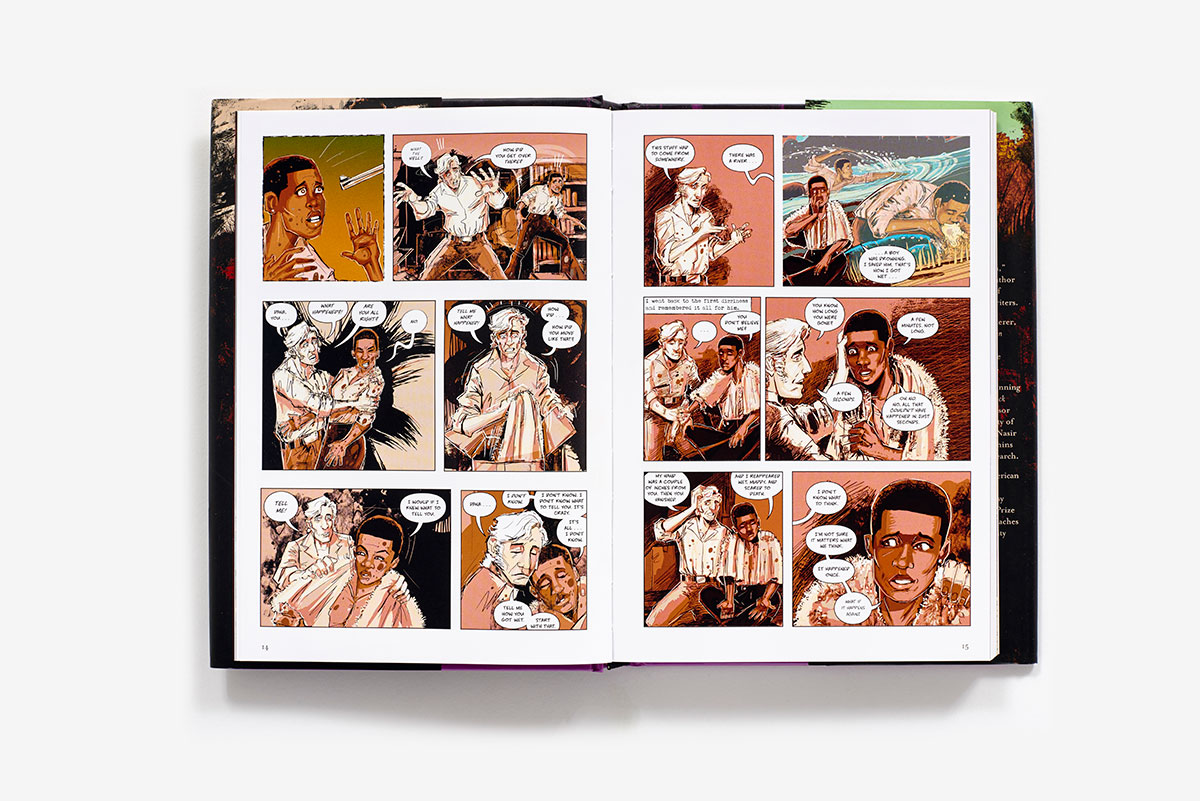 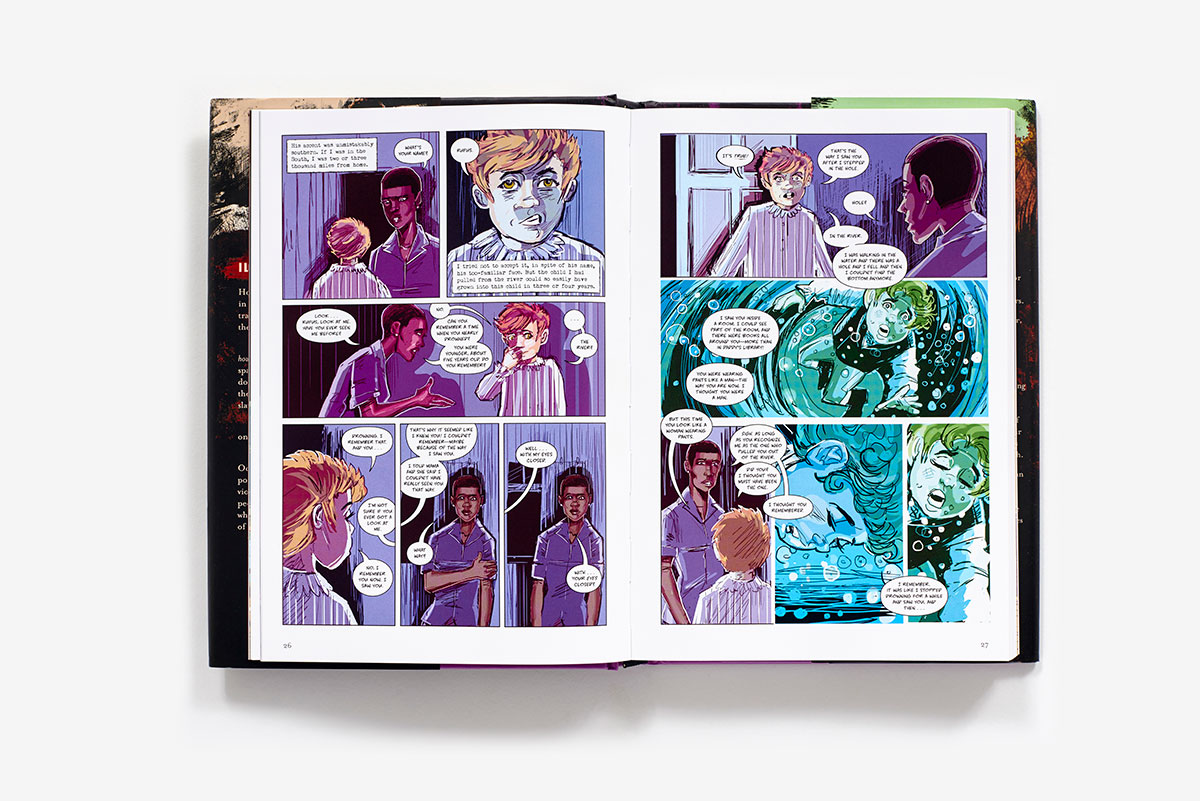 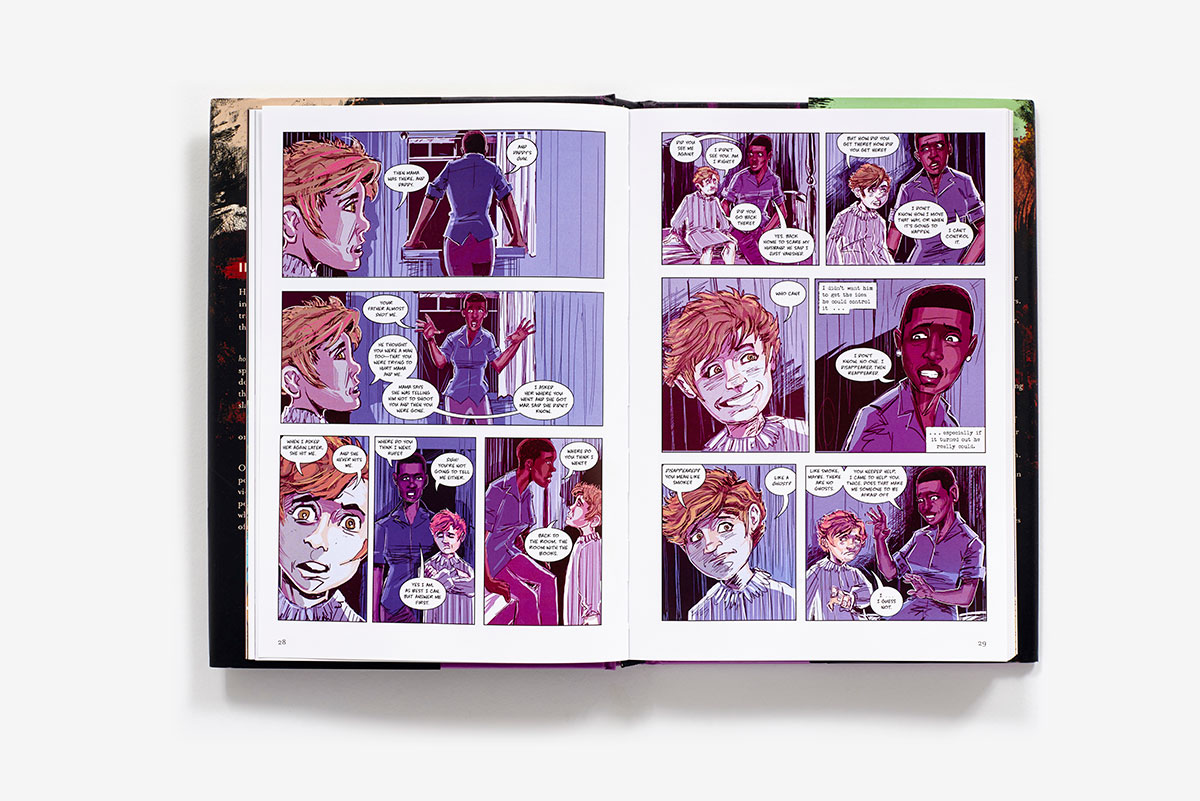 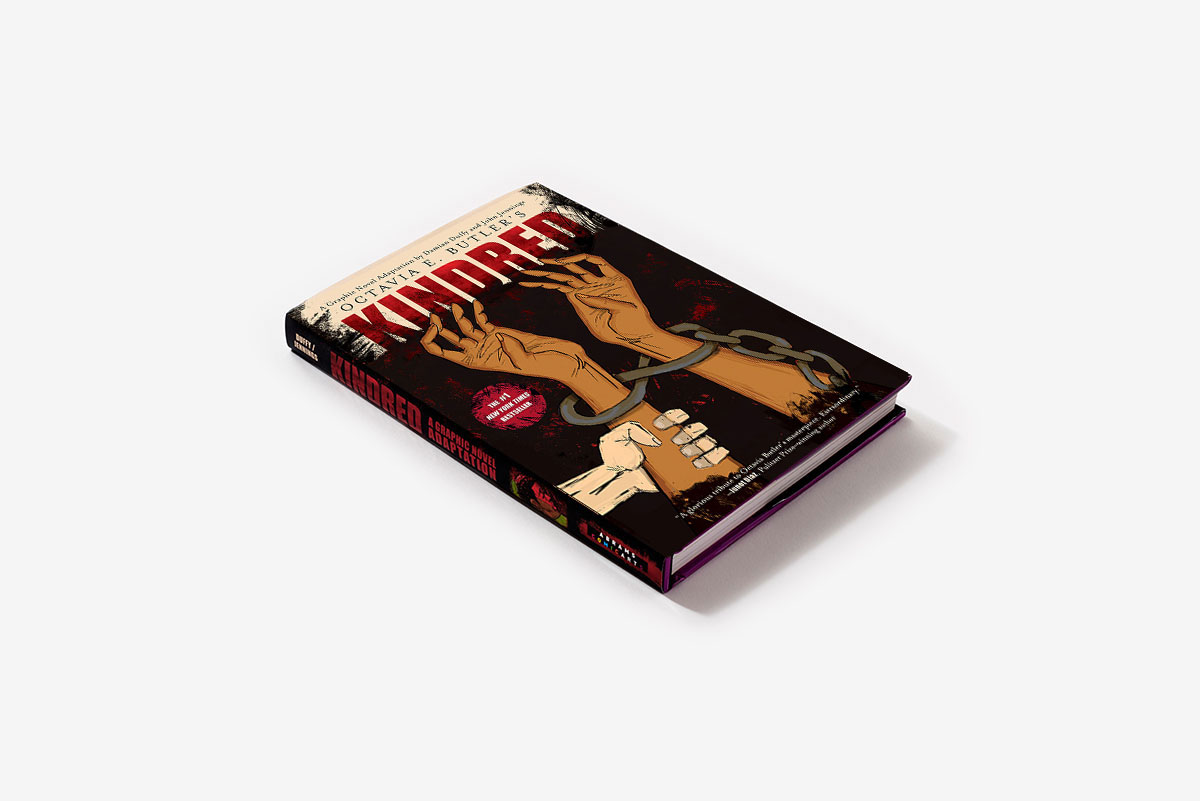 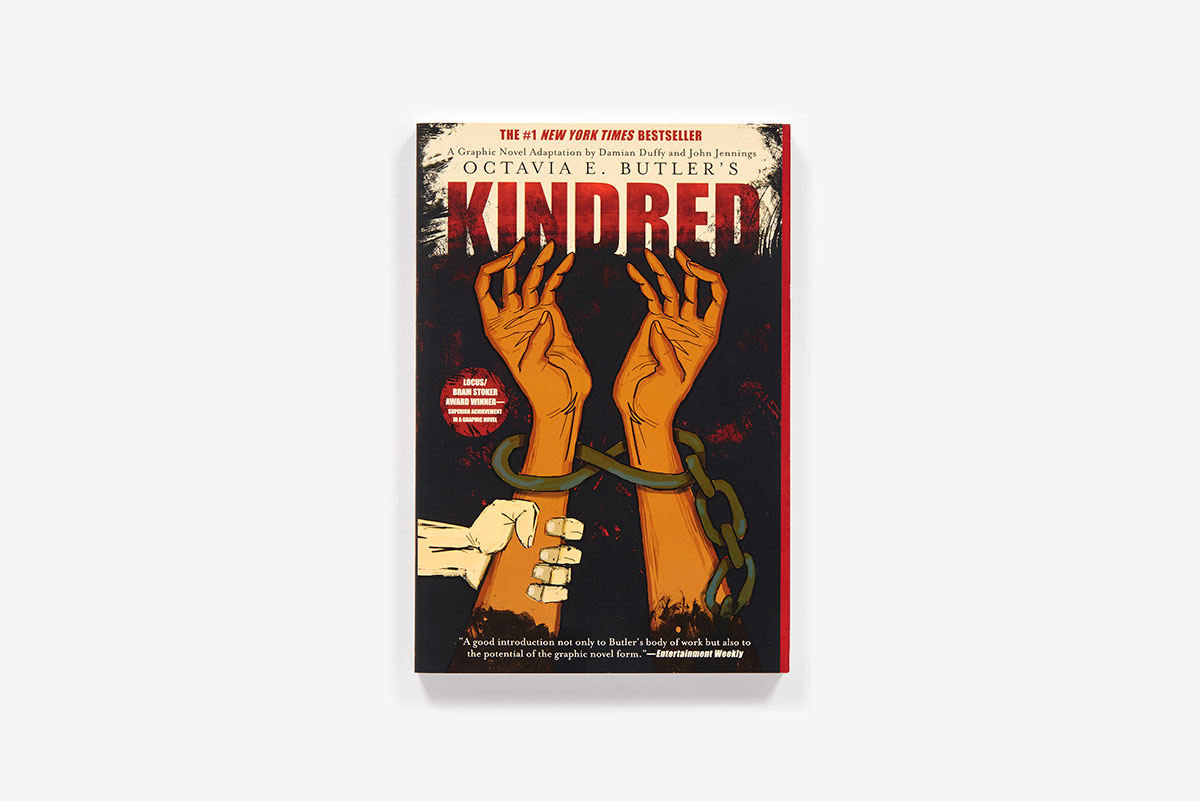 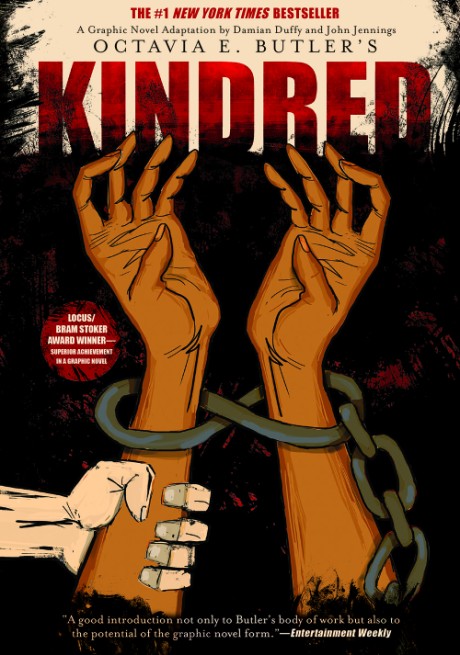 Held up as an essential work in feminist, science-fiction, and fantasy genres, as well as a cornerstone of the Afrofuturism movement, the intersectionality of race, history, and the treatment of women addressed in the book still remain critical topics in contemporary dialogue, both in the classroom and in the public sphere.

"Kindred is a perfect candidate for the graphic-novel medium—Damian Duffy’s taut adaptation and John Jennings’s tense, electric renderings vibrate throughout, pacing and containing, then pushing every ounce of discomfort to the forefront. Comics and science fiction exploit their greatest shared strength by illuminating the mundane that surrounds us, allowing any reader to critique and process our world with new vision."
Eisner–Award winning and New York Times bestselling graphic novelist of March, The Year, Nate Powell —

"Wonderful. Captures the essence of Octavia Butler’s vision even as it demonstrates the superlative skills of Duffy and Jennings."
author of Skin Folk, The New Moon’s Arms, and Sisters Mine, Nalo Hopkinson —

The timeliness of this release is important to note, as it revitalizes unresolved discussions around what it means to be a woman of color in America. Plus, the sense of frantic movement created by the artists’ colorful, layered outlines is a very cool touch.
IGN —

"Together, Duffy and Jennings manage to condense Kindred into 240 pages that are respectful of Butler’s original work while also feeling like a distinctly new story at the same time. In exchange for some of Butler’s scene descriptions, the book offers up a richly rendered, raw take on Dana’s experience, heavy with thick lines and blurred movement conveying her existential disorientation."
Gizmodo —

"Butler’s original novel is a powerful commentary on how the past informs the present and how we engage with both. But this adaptation makes an even more vivid statement about black Americans’ relationship with history. The kinetic lines feel urgent, messy, and visceral. The colors for scenes set in the present are muted while the colors of the past are vibrant, almost like a bright wake-up call to reality."
Slate —

"This adaptation of the classic science fiction/neo-slave narrative novel by Octavia E. Butler is required reading."
Vice's The Creators Project —

"The heavily shaded, thick-lined, and rough edged art lends a grimness appropriate to a life of jagged brutality and fearful uncertainty. Both a rewarding way to reexperience the tale and an accessible way to discover it. "
Booklist —

"It’s gorgeous, powerful, and makes you realize how resonant this sci fi story, about a young black woman living in 1970s California who’s transported to the South in the period before the Civil War, really is."
Book Riot —

"The story lends itself well to the medium, which makes it easy for writers to contrast narration with dialogue… According to a 2015 survey of Comic-Con attendees, half of comic fans under 30 are women. In graphic novel format, Kindred provides a voice that can resonate with those readers."
The Huffington Post —

“While Kindred was released nearly 40 years ago, its exploration of black womanhood and afrofuturism proves to be as relevant today as it was then. And now, with the added imagery, the graphic novel certainly isn’t short on capturing the same sentiment as the original.“
Complex Magazine —

“The violence is wrenching at times, but never over the top; what’s more disturbing, ultimately, is seeing this story through the eyes of someone who has been rendered powerless by the society around her.”
Library Journal —

"The book stays close to the original, with Duffy reproducing Butler’s matter-of-fact-to-the-point-of-bleakness prose, and Jennings turning in moody, expressive, woodcut-influenced illustrations that look hacked out of, or into, the past.”
Flavorwire —

"Nearly four decades after its original printing, Kindred remains a valuable story and teaching tool. From its pages, we are reminded of the destructive consequences of prejudice."
Cleaver Magazine —

"I do not lightly give anything a 5-star rating, but this is the best graphic adaptation of a full novel that I have ever encountered….the book belongs in every library and in the hands of any adult reader interested in serious graphic fiction.”
ICv2 —

"In its illustrated form, Kindred receives a new identity of sorts, while retaining all of the complexities, politics, and moral questions that propelled its author to literary icon status.”
NPR’s Code Switch Blog —

"Adapting any prose novel to the graphic format is an audacious undertaking at the best of times, but translating Octavia E. Butler’s fearsomely powerful work in particular must surely have been a herculean task. Yet Damian Duffy and John Jennings have managed it…A worthy and powerful supplement to a classic.”
The New York Times —

"Kindred is a deeply intimate book filled with emotion, and portraying it visually only adds to that weight. Butler’s voice is much needed in the social and political climate right now, and Kindred’s mix of time travel and a historically accurate portrayal of racism is an incredible way to introduce her work to comics readers.”
Paste Magazine —

"This is an outstanding adaptation of a brilliant novel, and there's nothing more you could possibly ask for.”
Boing Boing —

"Duffy’s words, coupled with Jennings’ brutally jagged, disorientating, gothic, and impactful art allows their adaptation to be two things: A graphic adaptation of a beloved novel, and an amplification of said novel. Reading them together illuminates Butler’s work from angles I never thought possible.”
Nerds of Color —

"… Duffy and Jennings have risen to the challenge; their book highlights all of the medium's strengths while still respecting Butler's original words… It's a good introduction not only to Butler's body of work but also to the potential of the graphic-novel form.”
Entertainment Weekly —

“If you’ve read Kindred this is a great companion. If you haven’t read it yet, this adaptation is strong enough to stand on its own."
Book Riot —

“The 240-page graphic novel adaptation makes Butler's story all the more accessible. Duffy's adaptation perfectly captures the horrific situations forced on the lives of black people in the pre-Civil War South and conveys the emotional impact of Butler's work. Jennings' illustrations add to the atmosphere; instead of pristinely drawn images, the images have a fitting "rough sketch" quality to them that emphasizes the hardships of life in those times…Taken together, the graphic novel adaptation of Kindred is not to be missed as a solid piece of entertainment.”
Kirkus Reviews —

John Jennings is the curator of the Megascope list and illustrator of the graphic novel adaptations of Octavia E. Butler’s Kindred and Parable of the Sower. He is a professor of media and cultural studies at the University of California, Riverside and was awarded the Nasir Jones Hiphop Fellowship at Harvard’s Hutchins Center for African & African American Research. He also co-edited the Eisner Award–winning anthology The Blacker the Ink: Constructions of Black Identity in Comics and Sequential Art.