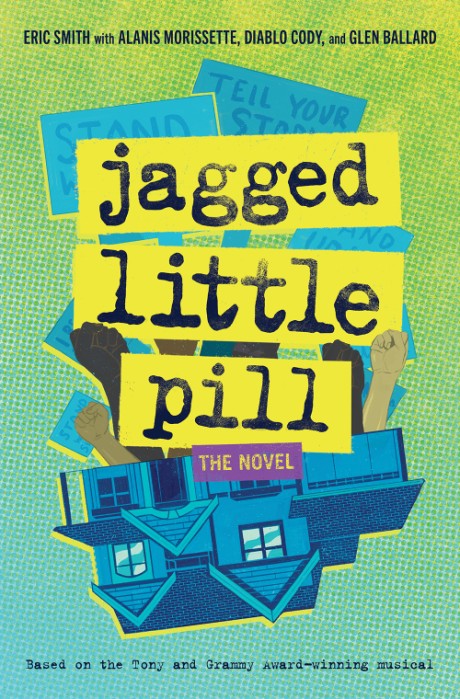 A timely and gutsy YA novel based on the Tony and Grammy Award winning musical from Alanis Morissette, Diablo Cody, and Glen Ballard!

Jagged Little Pill: The Novel follows the intertwining lives of five teens whose world is changed forever after the events at a party.

Adopted Frankie struggles to see eye-to-eye with her mother—who would rather ignore a problem and preserve their “perfect” life than stand up for what’s right. Jo just wants her mom to accept her queer identity—and is totally crushed when Frankie, the only person who really gets her, finds herself infatuated with someone new. Phoenix tries to find his place at the new school and balance wanting to spend time with Frankie but knowing he also has to help out with his sick sister at home. Bella wants to enjoy the end of high school and just head off to college without a hitch. Everyone expects Frankie's brother Nick to be the golden boy, but even though he just got into his dream school, he’s not even sure he's a good person. Each of their stories intersects when Bella is sexually assaulted at a party, and it looks like the perpetrator might get away with it.

Moving, heartfelt, and raw, Jagged Little Pill: The Novel draws on the musical’s story and gives readers deeper glimpses of the characters. It’s a story about the power of voicing your pain, standing up for what’s right, and finding healing and connection.

"Jagged Little Pill blends the spirit of some of our most beloved musical works into a new anthem: Teens long to be seen, heard, and for their voices to matter. An honest exploration of family and love, of identity and responsibility. Powerful and relevant.”
Laura Taylor Namey, New York Times bestselling author of A Cuban Girl’s Guide to Tea and Tomorrow —

"With Jagged Little Pill, Eric Smith brings the all the audacity, strength and spirit of the original with his own signature blend of compassion and tenderness. This novel turns snapshots to scrapbooks, and makes memories so vivid, they’ll feel like your own. A spectacular read."

Saundra Mitchell, author of The Prom and All the Things We Do in the Dark —

"Warm and clever and deeply sincere, Eric Smith's adaptation of Jagged Little Pill is a must-read for fans of the source material but also deeply affecting in its own right. As fresh and familiar as a surprising new cover of a song you know by heart."

“Like the music that spawned it, Jagged Little Pill is a righteous roar, a vivid and moving chronicle of youthful love, courage, and heartbreak.”
Jeff Zentner, Morris Award winning author of The Serpent King —

Eric Smith talks about the inspiration for the book

Since 1995, Alanis Morissette has been one of the most influential singer-songwriter-musicians in contemporary music. Her deeply expressive music and performances have earned vast critical praise and seven Grammy awards. Morissette’s 1995 debut, Jagged Little Pill, was followed by nine more eclectic and acclaimed albums. She has contributed musically to theatrical releases and acted on the big and small screen. Outside of entertainment, she is an avid supporter of female empowerment, as well as spiritual, psychological and physical wellness. In 2016, Alanis launched Conversation with Alanis Morissette, a monthly podcast that features conversations with a variety of revered authors, doctors, educators, and therapists, covering a wide range of psychosocial topics extending from spirituality to developmentalism to art. On December 5, 2019, Jagged Little Pill the musical made its Broadway debut at the Broadhurst Theatre in New York City. The show was nominated for fifteen Tony Awards and won two Tony Awards at the 2021 ceremony. In July 2020, Alanis released her ninth studio album, Such Pretty Forks in the Road, to rave reviews. In August 2021, Alanis kicked off her world tour, celebrating twenty-five years of Jagged Little Pill. Alanis is also a judge on Fox’s new competition show Alter Ego. Alanis will also serve as an executive producer on ABC’s upcoming sitcom Relatable, inspired by her life. Diablo Cody is the Oscar Award–winning writer and producer best known for Juno, Young Adult, and Jennifer’s Body. Glen Ballard is a six-time Grammy Award–winning producer and songwriter. Over the course of his career, he’s worked with some of the biggest names in music, including Alanis Morissette, Michael Jackson, Wilson Phillips, Dave Matthews Band, Quincy Jones, Aerosmith, Annie Lennox, Shakira, and many others. Eric Smith is a YA author and literary agent with P.S. Literary. His books include You Can Go Your Own Way, Battle of the Bands (edited with Lauren Gibaldi), Don’t Read the Comments (a YALSA Best Fiction for Young Adults selection), The Girl and the Grove, and The Geek’s Guide to Dating. Originally from Elizabeth, New Jersey, he now lives in Philadelphia with his family.