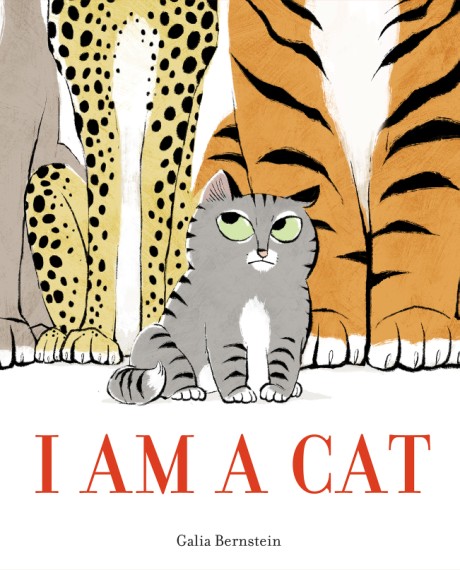 I Am a Cat

A bold celebration of what it takes to be a cat, from acclaimed author-illustrator Galia Bernstein—now in board book!

A simple housecat named Simon encounters some bigger cats: Lion, Puma, Panther, Tiger, and Cheetah. Each of the big cats has something to say about Simon not being “cat” enough. According to them, he just doesn’t measure up. He doesn’t have Lion’s mane or Cheetah’s spots. He doesn’t sleep in trees like Panther or climb mountains like Puma. He’s small and fuzzy, not big and strong. But ultimately, Simon shows the big cats that he’s just like them . . . only smaller.


A celebration of both individuality and community, I Am a Cat shows we’re all more alike than we think . . . if we look closely enough.

**STARRED REVIEW**
"Bernstein’s debut is a fresh, powerful twist on the tension between in-groups and out-groups. The big cats threaten, but her hero shows no signs of compromise or apology. And her spare, clean artwork shares the same sense of certainty."
Publishers Weekly —

"Simon helps everyone realize that, though he’s smaller than the rest, he’s a cat all the same. This straightforward concept is entertainingly executed in accessible, humorous sentences, while the digital and hand-painted animals prowl, prance, and play in a variety of perspectives that perfectly prove Simon’s point."
Booklist —

"Bernstein's distinct, slightly cartoony characterizations of her array of big cats are both educational and entertaining. The big cats are indeed large and toothy, but the portrayal is ever lighthearted. Clever."
Kirkus Reviews —

"There’s a touch of genuine biology in this low-key humorous text, which has a pleasing folkloric structure and formality in its tone. Bernstein’s soft-edged digital illustrations will delight cat lovers."
The Bulletin of the Center for Children’s Books —

**STARRED REVIEW**
"Witty language and delightfully bold digital illustrations with hand-painted textures elevate I Am a Cat from a read-once picture book to an experience that children will want to explore multiple times."
Shelf Awareness —

“Both kids and grown-ups can appreciate a small, stripey role model standing its ground when laughed at, and responding with calm, careful evidence rather than visceral frustration… It is a welcome change to see evidence-based arguments result in changed minds.”
Scientific American —

Galia Bernstein was born and raised in Israel before moving to New York to study illustration. She is the author and illustrator of the acclaimed picture books I Am a Cat and Leyla. She lives in Brooklyn.