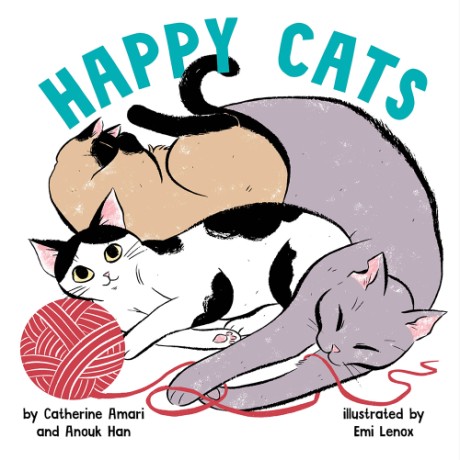 Sun cat
Mat cat
Wherever there is yarn cat

Emi Lenox’s charming and wonderfully expressive artwork is paired with a simple rhyming text that details all the different sorts of cats—because you can never have too many!

"It won’t take long for readers to begin chanting rather than reciting the lines. Simplicity at its best."
Kirkus Reviews —

"Even the most resolute dog lover will be charmed by the many furry felines in this title for the very young. . .each page will delight readers."
School Library Journal —

Catherine Amari is a children’s book editor who lives in the Hudson Valley in New York with her husband, surrounded by deer, foxes, coyotes, and the occasional brave cat. Anouk Han is a children’s book author and designer. She is allergic to cats but loves them and all other furred, scaled, feathered, and finned creatures just the same. She lives in Brooklyn with her family. Emi Lenox is the author and illustrator of an autobiographical sketch diary called Emitown, and she created and drew Plutona with Jeff Lemire, both published by Image Comics. Her work can also be seen in comic series such as Black Hammer and Nowhere Men. Besides comics, Lenox enjoys gaming on her Nintendo Switch and doodling all sorts of cute things such as cats and moogles. She lives in Portland, Oregon.