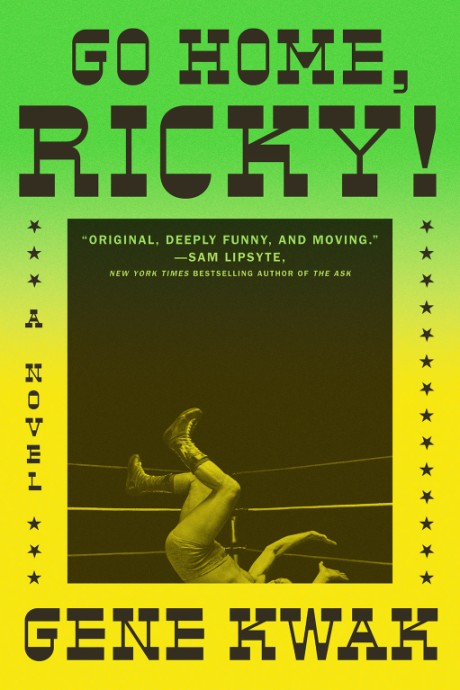 From a rising literary star comes a fresh, satirical novel about masculinity and tenderness, fatherhood and motherhood, set in the world of semi-professional wrestling

After seven years on the semi-pro wrestling circuit, Ricky Twohatchet, a.k.a. Richard Powell, needs one last match before he gets called up to the big leagues. Unlike some wrestlers who only play the stereotype, Ricky believes he comes by his persona honestly—he’s half white and half Native American—even if he’s never met his father. But the night of the match in Omaha, Nebraska, something askew in their intricate choreography sets him on a course for disaster. He finishes with a neck injury that leaves him in a restrictive brace and a video already going viral: him spewing profanities at his ex-partner, Johnny America. Injury aside, he’s out of the league.

Without a routine or identity, Ricky spirals downward, finally setting off to learn about his father, and what he finds will explode everything he knows about who he is—as a man, a friend, a son, a partner, and a wrestler. Go Home, Ricky! is a sometimes-witty, sometimes-heart-wrenching, but always gripping look into the complexities of identity.

“[An] acerbic and hilarious hyper-masculine debut picaresque... As a prose stylist, Kwak is impeccable. Every sentence is explosive, energetic, confident and hyperpolished, as if meant to be shouted proudly in a stadium of thousands.”

“Go Home, Ricky! takes on the urgent themes of today— identity, belonging, economic precarity —with an almost throwback commitment to the exhilarations of voice, of language. This pile driver of a novel is original, deeply funny, and moving. Gene Kwak revels in the contradictions and nuances of life, because that’s where wisdom comes from, as well as the best fiction.”
New York Times bestselling author of The Ask and The Fun Parts, Sam Lipsyte —

“Propulsive and poetic, full of quick-hitting monosyllables, it pounds out a drumbeat of pure sound, amid which, if you focus, you can find plentiful deadpan insights into the consummate strangeness of contemporary Middle America.”
Chicago Review of Books —

“It takes a writer of extreme talent to handle a narrator so rough-edged, and Kwak is indeed talented. Like Ricky, his prose is deceptive. It will draw you in with its humor, its easy flow, but to craft a voice that feels so true and lived in takes a careful and delicate hand, a writer unafraid to be completely open and exposed.”
Electric Literature —

“Go Home, Ricky! is a rambunctious and constantly surprising novel about wrestling, absent fathers and father figures, and the personas we’ll wear on the way to figuring out who we really are. Kwak’s sly, big-hearted novel resists easy answers, making Ricky’s odyssey all the more satisfying and true.”
author of Stephen Florida, Gabe Habash —

“Ricky is a hothead and a self-saboteur supreme, yet his earnestness and humor make him endearing, and Kwak’s unconventional and sharp writing further draws readers in. Go Home, Ricky! explores race, class, and identity in subtle yet fascinating ways and is an extremely promising first novel from a distinct voice.”
Booklist —

“It's impossible not to root for underdog wrestler Ricky Twohatchet, a scrappy, good-natured bigmouth with very bad luck. Bleak, funny, and bittersweet, Go Home Ricky! is about finding your people and finding your place in the world. Gene Kwak’s playful, adroit prose is as offbeat as it is heartfelt—this is an unforgettable debut.”
author of Black Light: Stories, longlisted for the National Book Award, Kimberly King Parsons —

“Hugely engaging and bitingly funny...that rare story that makes you feel, in the end, like you've made a lifelong friend.”
Hyphen Magazine —

“Ricky Twohatchet is the kind of narrator you think about long after you've finished reading—brash, messy, flawed, but also deeply lovable, achingly human. Kwak's humor is undeniable, but what makes Go Home, Ricky! so special is his sensitivity, the care with which he handles his characters, the generosity of his portrayals.”
author of Pizza Girl, Jean Kyoung Frazier —

“Gene Kwak is an enormously talented young writer who has a way of untangling race and masculinity with a lot more humor and originality than any of his contemporaries. Go Home, Ricky! has stayed with me. I can’t forget its rhythm and energy.”
author of Pew and Certain American States, Catherine Lacey —

“One of the best books of the year...Kwak’s knack for sharp prose and tight plot are on full display throughout the entire book...Everything about Ricky is perfect...Go Home, Ricky! is a must read.”
Debutiful —

“Gene Kwak writes with a head-spinning musicality and depth of spirit that cannot be denied. Each sentence sparkles like a gemstone just cracked open, rewarding the attentive ear with ecstatic nuance, vibrant rhythm, a way of seeing and speaking you can come to through no one else but him. Pull out any line from Go Home, Ricky! and you will find immediate evidence of a new classic culled deep from the heart of America, with no holds barred style to spare. In no small terms, Kwak is a must.”
author of Alice Knott and Three Hundred Thousand, Blake Butler —

“Gene Kwak is a force to be reckoned with. I'm astonished by the way he poses questions of masculinity and racial identity with such a deftness that they appear both subtle and urgent at once. I cannot wait for this novel to find its readers.”
author of The Grip of It and False Bingo, Jac Jemc —

Gene Kwak has published fiction and nonfiction both in print and online in the The Los Angeles Review of Books, The Rumpus, Wigleaf, Redivider, Hobart, Electric Literature, and in the flash anthology Forward: 21st Century Flash Fiction. He teaches at the University of Nebraska Omaha. Go Home, Ricky! is his debut novel.